These are our favorite Chinese New Year Picture Books to help kids understand the festival and the Lunar New Year. 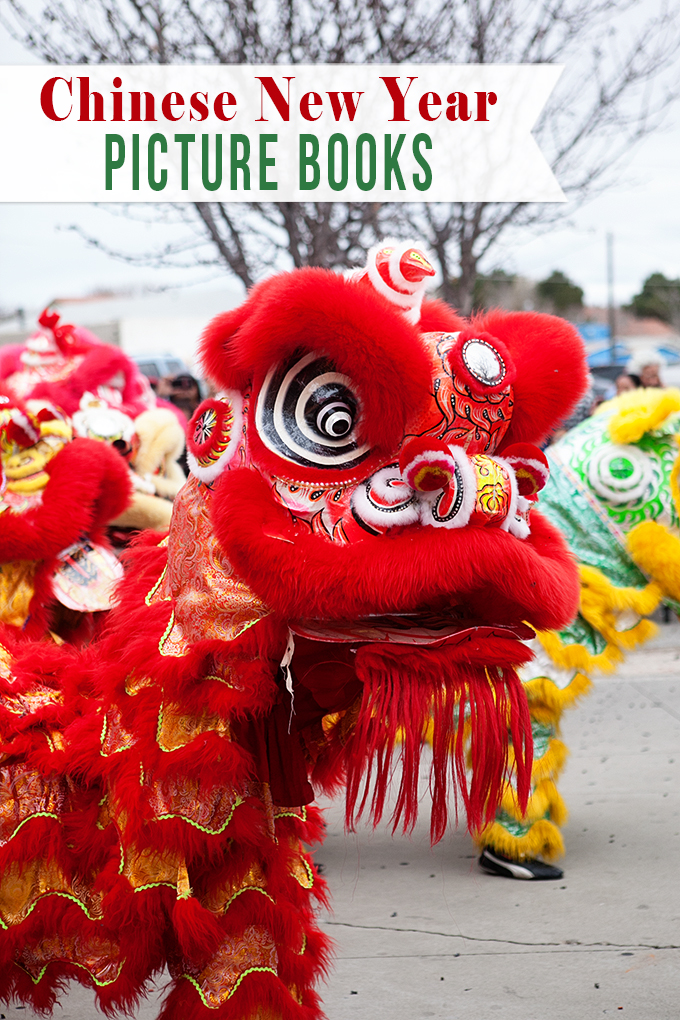 This year, the Chinese New Year is on Saturday, January 25th. This is a cultural celebration I love so much! The colors and the dragons and the dancing – it’s all so fun. In addition to attending a festival each year, I also like to share picture books about the Chinese New Year with my kids to help them understand the cultural significance.

Last year we went to a Chinese New Year Festival in Albuquerque to celebrate the lunar new year. I love to take my kids to cultural celebrations like this! Not only is it fun, but as they develop a broader understanding of different cultures, they will be more tolerant and accepting. I want them to be curious and compassionate as they engage with the world around them.

This Chinese New Year Festival took place at the big Asian Market in Albuquerque.  In Chinese culture, the lion dances are part of the traditional ceremony to ward off evil spirits and invite prosperity in the coming year. 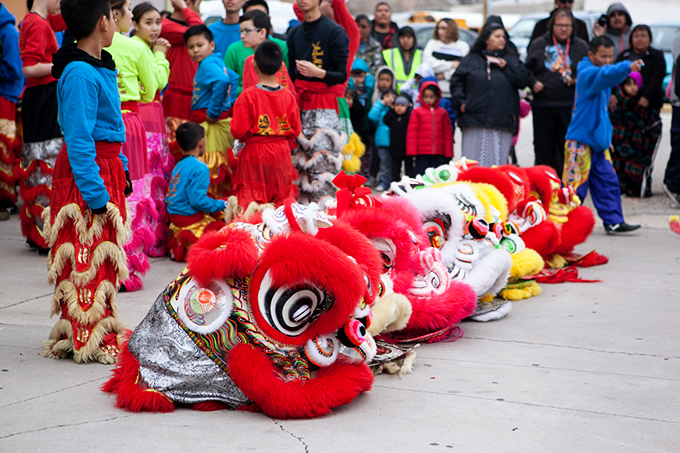 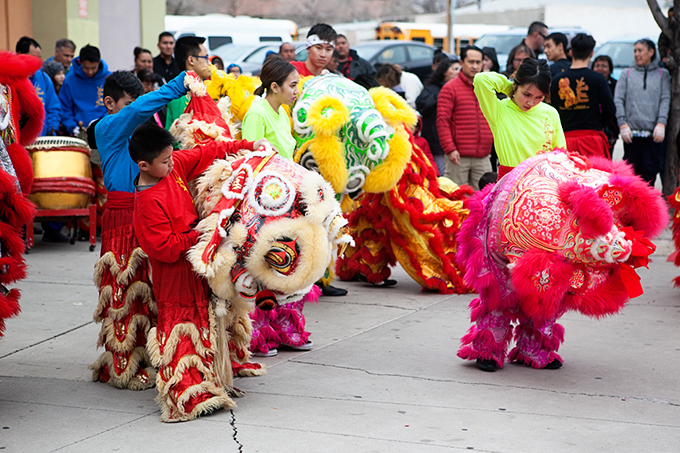 The lion dances are colorful, loud, and fun. They begin with fireworks and drums, cymbals, and gongs. Each lion has two performers, one to move the back legs and one for the front.

The lions at the Albuquerque Chinese New Year Festival were so playful and fun. As the kids put their red envelopes (traditionally filled with money) into the lions’ mouths, they were often pulled out into the center of the festivities. As you can see below, one lion attempted to eat Esme’s head, which gave everyone a good laugh. 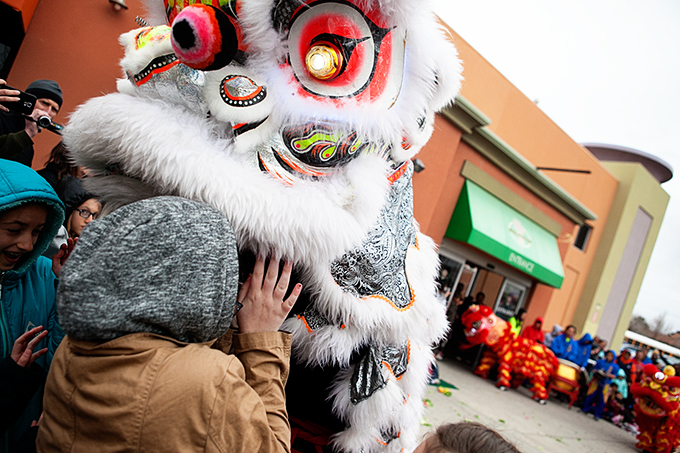 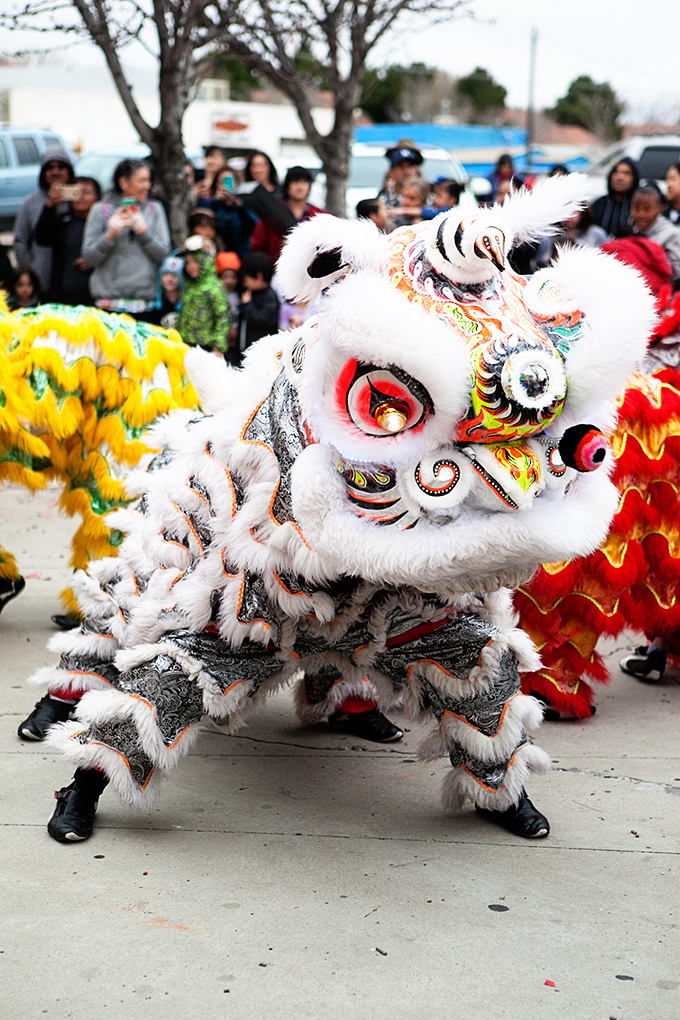 The highlight of the lion dances is the eating of the greens. As you can see below, a bundle of greens is tied and hung from the entrance to the market. The lions, after some bouncy footwork, “eat” the greens. This is another tradition to bring good luck. 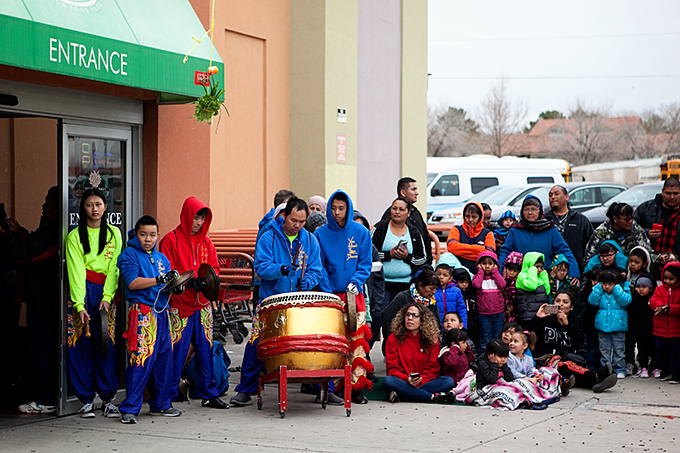 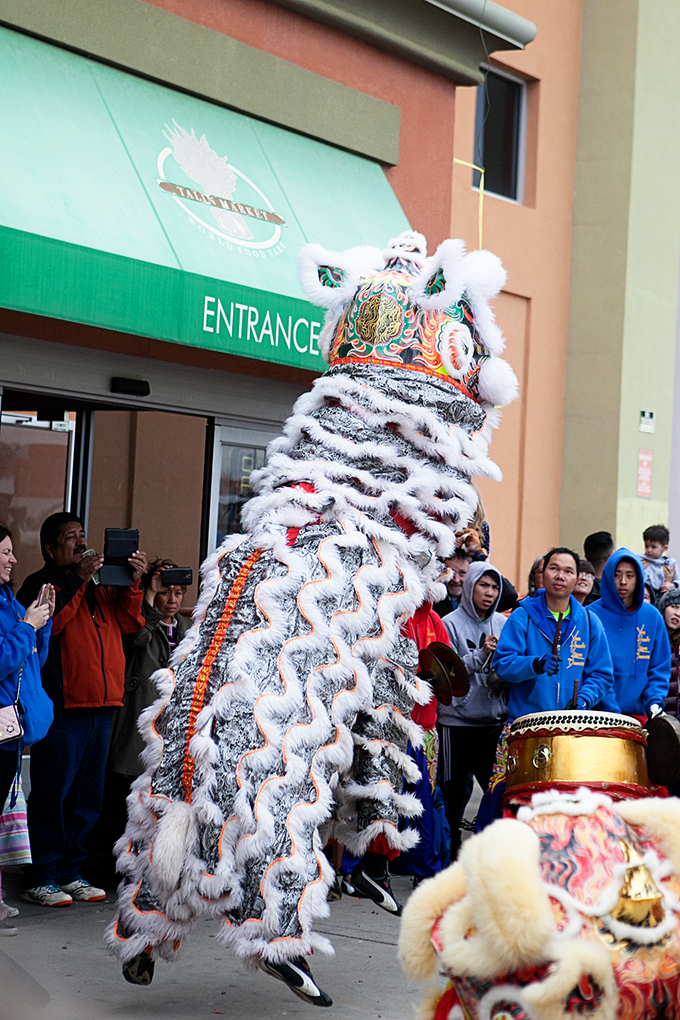 We had such a fun time! The atmosphere was so energetic and playful that we hardly noticed how chilly and blustery it was outside. 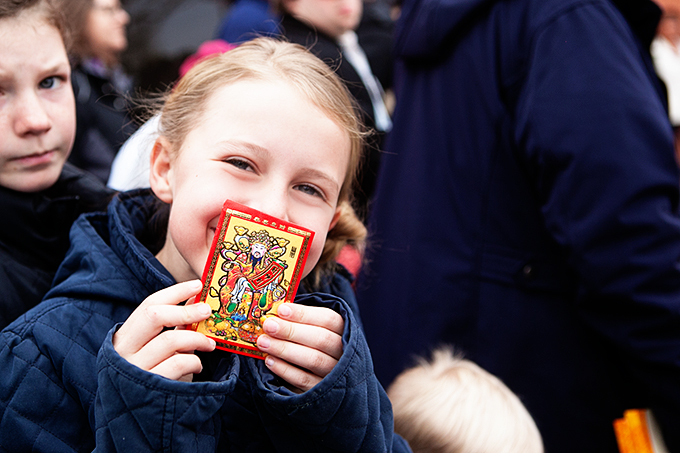 To keep the fun alive a little longer, we also found some Chinese New Year Picture books to read at home. They have given us a better understanding of the holiday and its festivities. They’ve also inspired more lion dances at home. It’s been quite entertaining!

Here are a few that we highly recommend! Note: the Amazon links in this post are affiliate links. 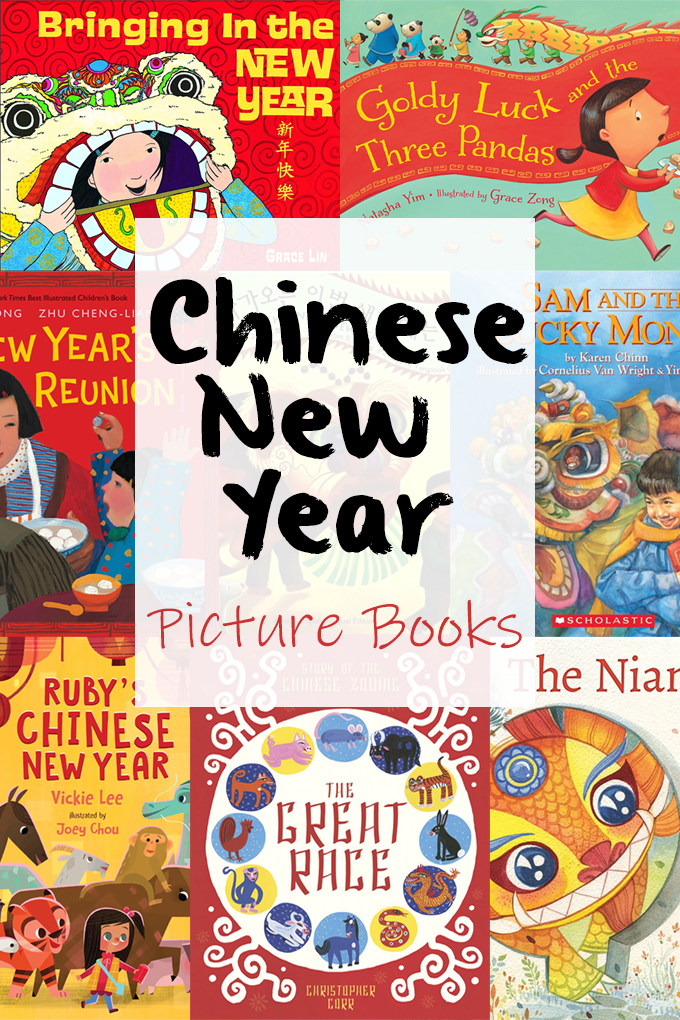 Bringing in the New Year by Grace Lin | We love her middle grade chapters books and we were so pleased to find this picture book too! This is a bright, colorful depiction of the holiday. It’s a good read even for very young kids.

Ruby’s Chinese New Year by Vicki Lee | This is a brand new book, released in December. My girls love the adorable pictures in this one. The story follows Ruby and her cute little cat on their way to deliver a special card to Grandma for the New Year. It’s very fun and sweet.

A New Year’s Reunion by Yu Li-Qiong | A beautiful story about both the Chinese New Year and a family dealing with a migrant work situation. A very well told story.

The Great Race by Christopher Corr | Long ago in ancient China, the emperor gathered all the animals for a great race. The first 12 animals to cross the river would each have a year named after them. This folktale tells the story of the Chinese zodiac was created.

This Next New Year by Janet S. Wong | This one does a really good job of explaining the reasons behind the rituals. Also, the narrator is half Korean and he shows how modern day celebrations can be a blend of traditions.

Goldy Luck and the Three Pandas by Natasha Yim | This is a retelling of the Goldie Locks story, but this one ends with the Chinese New Year. It also has a recipe for Turnip Cakes at the end of the book that my kids are actually excited to try. Three cheers for fairy tale retellings that inspire adventurous eating!

Sam and the Lucky Money by Karen Chinn | Sam is so excited to spend the “lucky money” he received for the New Year. However, on his way to spend it, he has an encounter with a homeless man that changes his perspective.

The Nian Monster by Andrea Wang | Xingling and her grandmother are all ready for the New Year when a monster arrives. The Nian Monster is determined to swallow Shanghai whole, but Xingling has a clever idea! This is a fun story that my kids love.

Celebrate the Chinese New Year by Carolyn Otto | This is an excellent nonfiction picture book by National Geographic Kids. With colorful photographs and easy to understand descriptions, this is a fun but entertaining look at the festival and holiday.

Happy Happy Chinese New Year by DEMI | This picture book is for your older kids that want to know the WHY behind all of the traditions. It’s very descriptive and explains all of the rituals. My 9 and 11 year olds loved this one. 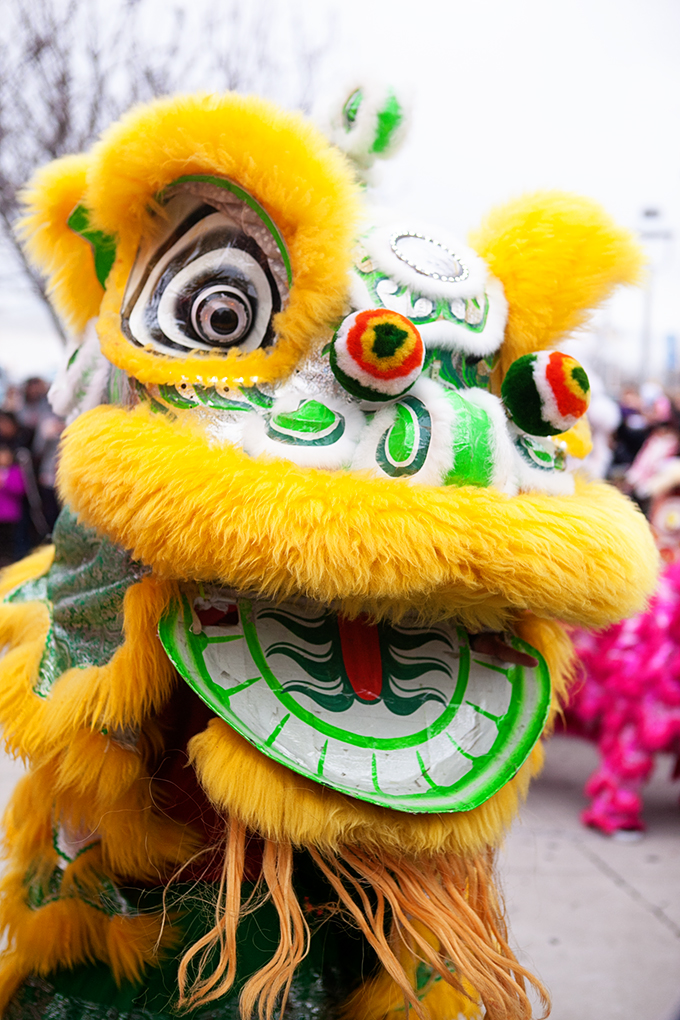