My kids and I put together a list of the best Graphic Novels for Tweens that we’ve been reading lately. Check them out! 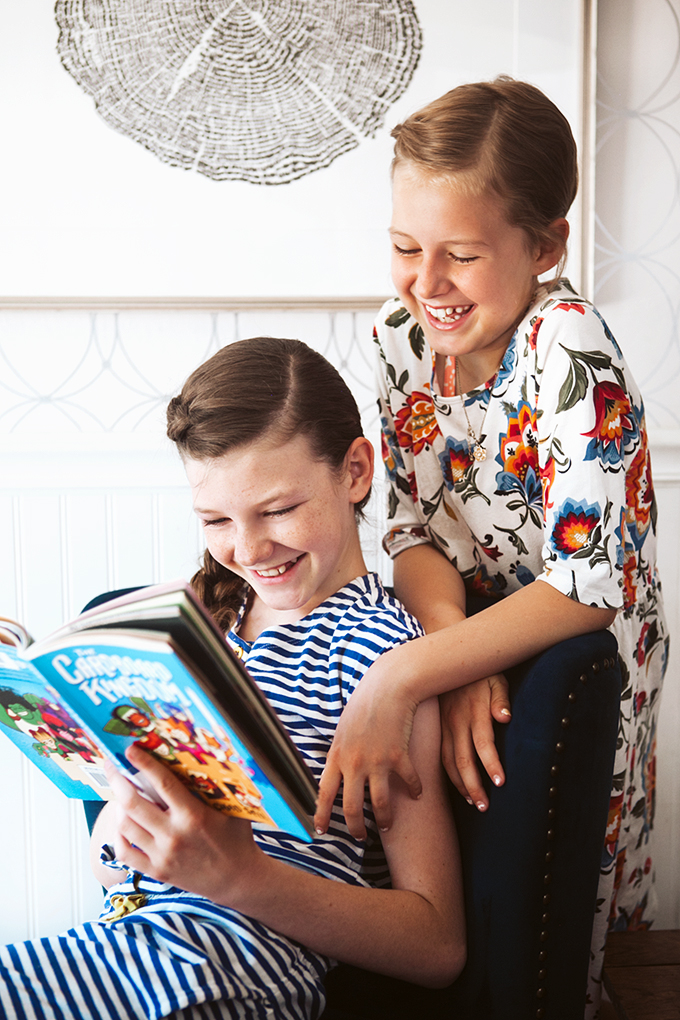 Every time we go to the library or book store, all of my kids make a beeline for the graphic novel shelf. It’s always the first place they look for new books!

But they also have a lot of opinions about what makes a graphic novel great. Really, I’ve got a whole house full of serious graphic novel aficionados here.

So, when I told them I wanted to write an article about some of the best new graphic novels for tweens, they were 100% on board to help with “research.” For the past two weeks, we’ve had a gigantic stack of middle grade graphic novels that everyone’s been making their way through. It’s the best kind of summer “work.”

We won’t tell you about all the books that didn’t make the cut, but these 10 New Graphic Novels for Tweens were a big hit around here! 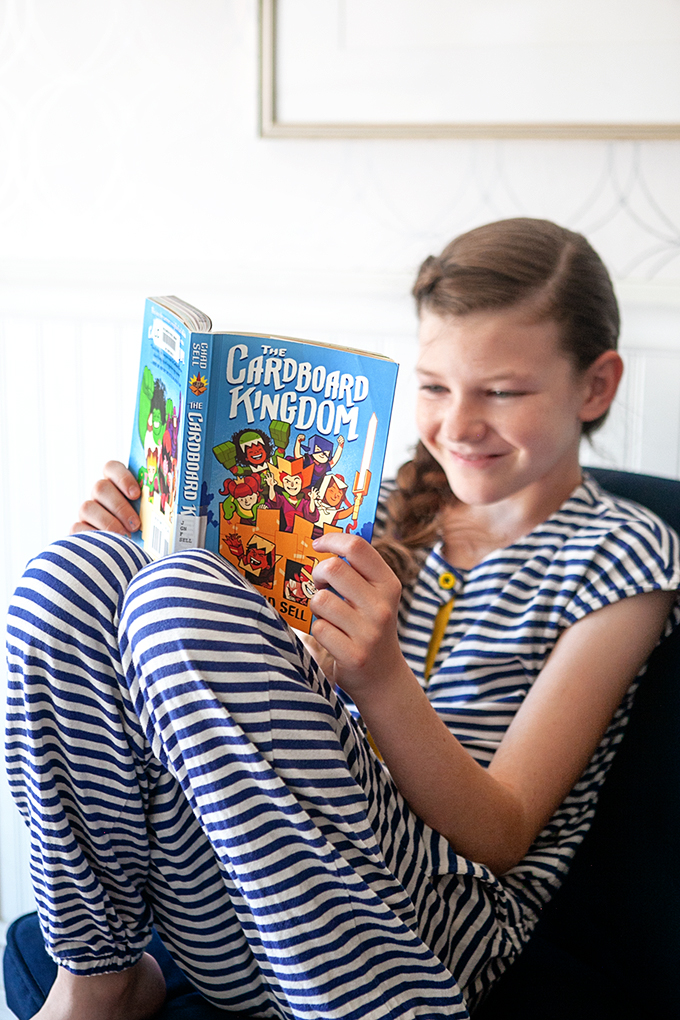 The reviewers that helped me put this list of graphic novels for tweens together are: 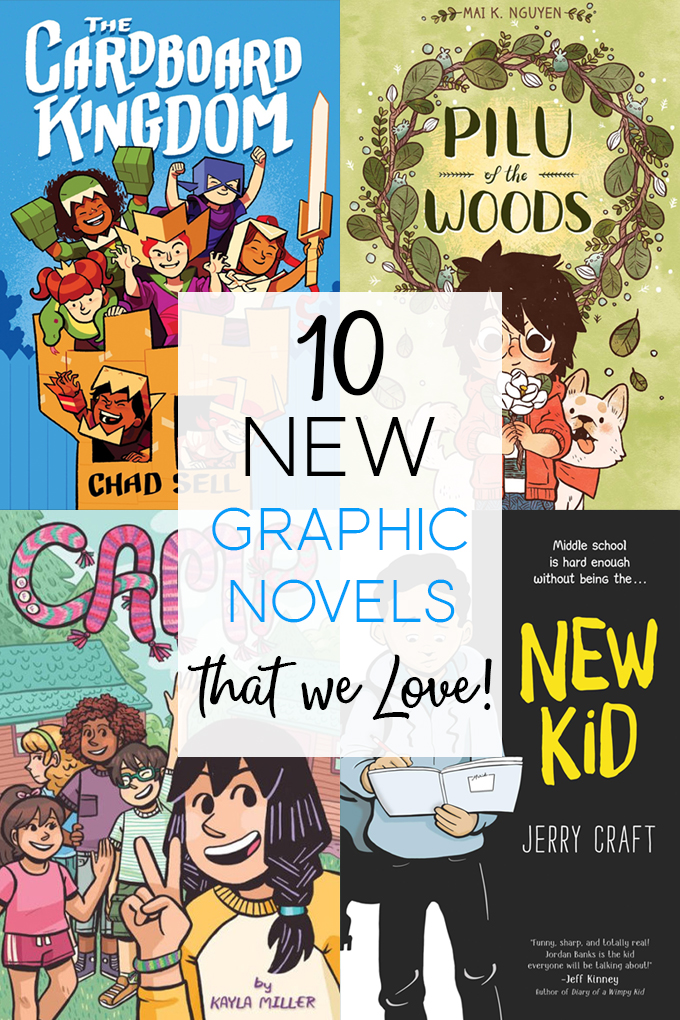 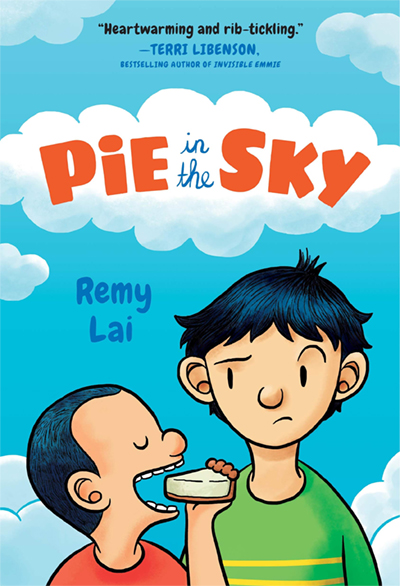 Pie in the Sky by Remi Lai

After his father unexpectedly passes away, Jingwen and his family immigrate to Australia. Jingwen doesn’t speak English so making friends in a new country feels impossible. To distract himself from the loneliness, he dreams about the bakery that his father had planned to open before he died.

Jingwen enlists his younger brother, Yanghao, to help him start working on recipes for the bakery. Unfortunately, his mother has one important rule: the boys are NOT allowed to use the oven. It gets tricky, but in the best ways.

Esme says: I liked this one a lot. I loved the little brother character. He annoys Jingwen, but I thought he was really funny. I liked reading about their experience as immigrants to a new country and what it was like to not know the language and try to fit in. 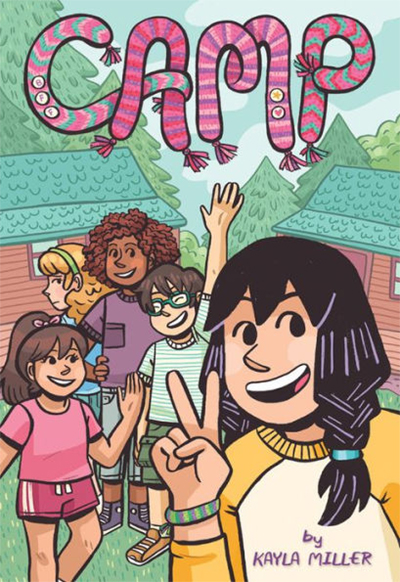 Olive and Willow are best friends and they’re excited to go to summer camp together. But while Olive finds it easy and fun making new friends at camp, Willow is more apprehensive and latches onto Olive. This is a wonderful, realistic look at friendship challenges and how to work through them in a healthy way.

Adelaide says: I liked that in the end Willow learned how to make friends and that it’s alright to have more than one friend. I just finished third grade and it was hard figuring out who to play with at recess. Sometimes people at school only want to play with me, but I want to play with everyone. This book felt really real to me. 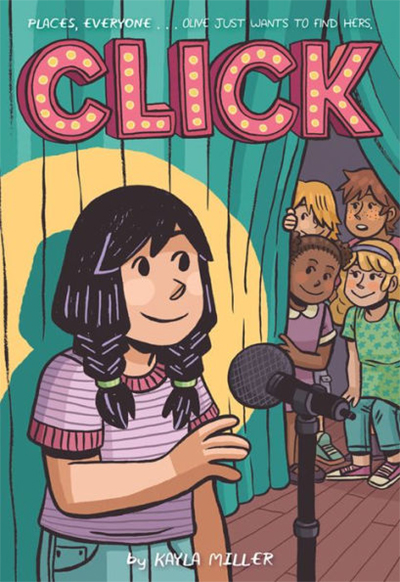 Olive is friends with everyone in the fifth grade, but one day she realizes that she doesn’t fit in anymore. She still has friends, but she doesn’t feel like she has a best friend. A school variety show brings all of the issues to a head and Olive hast to find her own place in the show and among her friends. This is really well done!

Adelaide says: I love all the illustrations in this book. They help tell the story so well. If you go to school and have to figure out how to be friends with everyone and how to find friends you really like, then you will really understand this book. 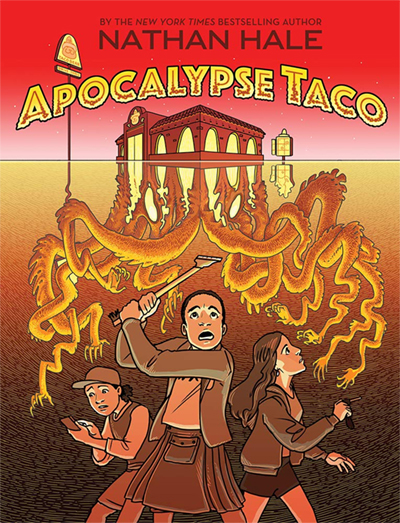 Three teens leave theater practice one night to go grab some fast food. When they return, they find clones of themselves on stage. And then they notice other things are weird too. When they went to the taco place, they actually crossed over into an alien dimension where everything is similar to the world they know, but much stranger. It’s quite an adventure watching them figure out how to escape!

Esme says: This book is really funny! It’s also pretty gross. People get eaten by tacos and bees. It’s a science fiction story with a cloning machine gone wrong, which is such a strange and fun premise. The best character is the girl with a million arms. If you like weird things, this is the book for you. 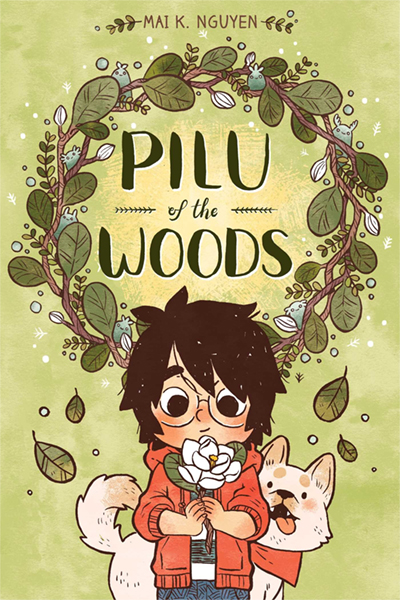 Pilu of the Woods by Mai K. Nguyen

Willow loves nature and loves going into the woods near her house. She feels calm there and can escape from all the more difficult emotions she likes to keep locked away.

But her emotions can’t stay locked away forever and Willow begins to encounter them wandering around in the woods, forcing her to confront her feelings once and for all. This is a gorgeous, meaningful graphic novel for tweens. It offers fantastic, age appropriate insights for better emotional intelligence.

Eila says: If you like Hilda and the Troll, you will probably like this book too. I think it was really creative how Pilu was a tree nymph and her parents were trees. It was so clever how Willow’s emotions became monsters in the forest and she had to learn how to control them. I thought it had a really good message. 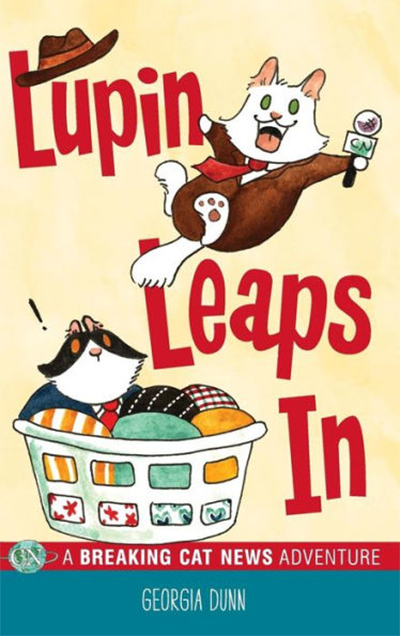 Lupin Leaps In by Georgia Dunn

This is more a book of comics than a graphic novel, but my kids are obsessed with it. Three hilarious house cats are reporting what they see as “breaking news” around the house. I don’t even particularly like comic books like this, but this one even got me laughing out loud.

Esme says: These books are so hilarious. This is the second book, but you don’t have to read them in order. I love cats and these cats are news reporters that report on things that they think are important – these are mostly really random. I love that it’s like getting to see inside of a cat’s mind. If you like cats, you’ll probably like this book. 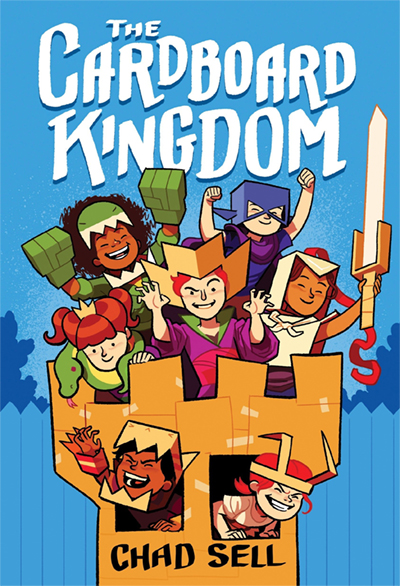 The Cardboard Kingdom by Chad Sell

In this magical neighborhood, sixteen kids transform a bunch of cardboard boxes into a kingdom they can escape to for the summer before school begins again. There are knights, robots, beasts, banshees . . . all the imagination! It’s a wonderful book.

Eila says: This is the best graphic novel I’ve read recently! I love the colorful, fun illustrations. And the story is so creative! 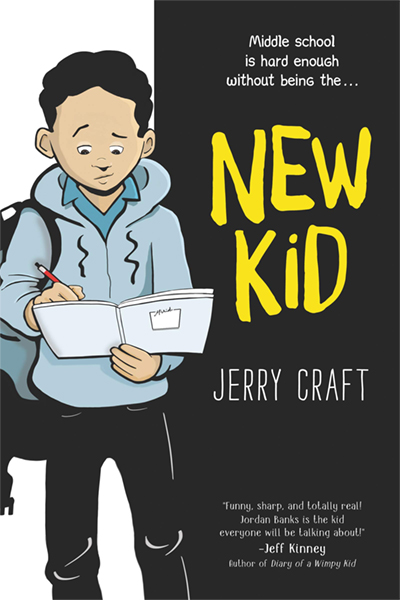 Jordan Banks is in the seventh grade and loves drawing cartoons about his life. But when his parents send him to a prestigious private school, he finds that he’s one of only a few kids of color. He feels like he belongs to two different worlds and he doesn’t really fit into either one.

This is an excellent look at middle school issues, microagression, racism, and friendship.

Esme says: This one is really good! I loved seeing all the drawings inside of Jordan’s sketchbook. It was interesting to see how even “nice” people can still be racist and how they don’t always even realize they are being racist. If you like Kwame Alexander and Raina Telgemeier, you will definitely like this. 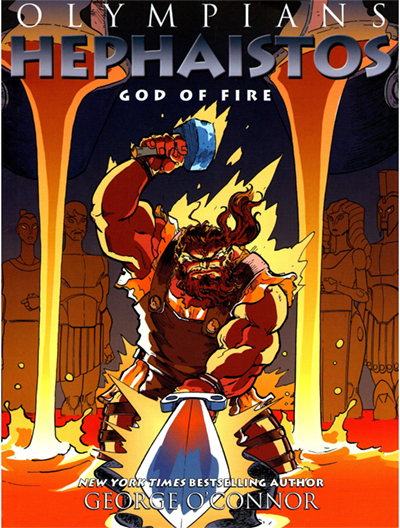 If you been following this graphic novel series (which you really should be!), this is the eleventh book about the Olympian family tree. These are FANTASTIC graphic novels for anyone interested in the Greek Gods!

This one tells the story of Hephaistos who was thrown from Mount Olympus as a newborn and caught by Thetis and Eurynome who raised him on the island of Lemnos.

Eila says: These are some of my favorite graphic novels. I’ve read every single one so far and they’re all good. I liked this one because Hephaistos was able to become a respected god even after everyone in his family treats him poorly because of his lame leg. 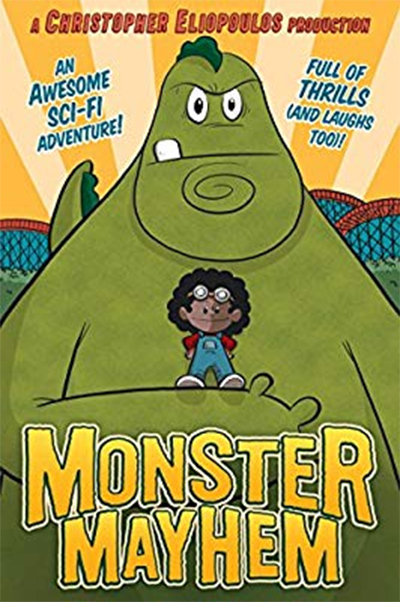 Zoe has a hard time connecting with kids her own age. Instead, she loves watching classic monster movies and inventing her own robots. But one day, she finds a mysterious ring on her way home from school and she puts it on.

The next morning a monster from one of her favorite movies appears at her window . . . and he wants to be her friend. But friendly monsters aren’t the only ones showing up now. In fact, there’s a whole lot of monster mayhem ahead!

Eila says: This one was really fun. I liked that this one wasn’t realistic at all. I loved the way the characters were drawn – so adorable. It was fast to read. I would recommend this book to anyone who loves robots and monsters.