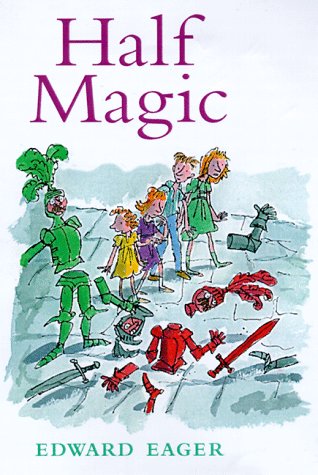 We just finished reading Half-Magic by Edward Eager for the umpteenth time and I thought you should know that it is perhaps one of the very best family read-aloud books ever written.

As a family that reads aloud together nearly every night, we’ve identified a few things that make a really good read aloud book.

The first criterion a book must meet, and perhaps the most important, is that it has to appeal to both kids and adults. There are many children’s books that while they may appeal to my kids and qualify as a “good read,” they are just going to make my brain hurt. Like those Humphrey hamster books my kids love but I really can’t stand.

There are some children’s books, however, that have a timeless charm that makes them forever appealing. That’s Half Magic. I will never tire of reading it aloud, which is how it’s been read up to the umpteenth time here.

After reading it so many times, it’s become very clear to me just why I love it so much. It’s ordinary and extraordinary at the same time. There’s magic, a coin that grants wishes, and adventure. Extraordinary things happen that make you want to keep reading and keep guessing at what happens next. But all that magic and adventure is wrapped up in the ordinary.

Still, even without the country or a lake, the summer was a fine thing, particularly when you were at the beginning of it, looking ahead into it. There would be months of beautifully long, empty days, and each other to play with, and the books from the library.

The kids squabble as siblings do and they don’t have much in the way of money and their summer vacation is happening with the housekeeper/babysitter at home while their widowed and frazzled mother works. Even the magic is only half magic, i.e. the coin only gives the children half of what they wish for. And the adventures themselves often stumble into the mundane. Jane on a miserable half-baked impulse wishes herself out of the family and her siblings spend an entire chapter trying to make her remember who she is and get her to come back home. It’s not dragons and wizards, and yet the magic of Edward Eager is that it’s still incredibly gripping. 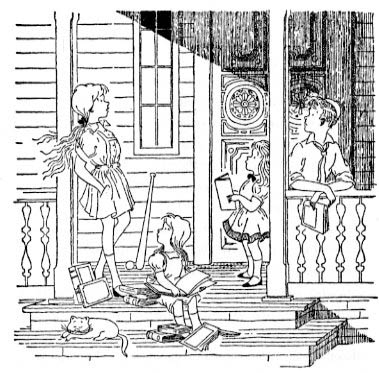 In fact, it’s so gripping precisely because of the ordinary elements Eager captures. These kids, who get excited about library books and feel bad when their friends get to go away to the country for the summer, not unlike my kids, and their mother, who works and worries and often feels rather tired, not unlike myself, when you boil it all down, just find a coin on the ground, which really could happen to anyone. And their lives change, but in the end, even after all of the adventures, the changes are the small and simple kind.

One of my favorite parts is at the very end of the book. Jane makes the last wish without ever knowing she makes it. After everything that has happened, she’s feeling content and almost happy, but she realizes that there is still one small corner in her mind that isn’t completely happy. I won’t give it all away if you haven’t had the pleasure yet, but I have to tell you that when the used up magic coin relents and brings Jane just what she needs but doesn’t even quite know she wants, I almost always tear up. It’s the kind of magic that feels so real, the kind I’m still looking for as an adult.

And a wonderful feeling of peace filled the heart of Jane, and she went to sleep with a smile on her face.

In the morning she’d forgotten all about the wish. She knew only that the sun was yellow and warm, and the sky was blue, and a golden future lay ahead, and all was right with the world.

It’s the best kind of magic, isn’t it?

It is also worth mentioning, that this particular book really is a wonderful read aloud. It also helps up the ante on the magic factor if you read it aloud with some small people. Knowing how magic each page will feel to a little listener only enhances all the magic for the grown up reader. It’s always that way with a really good read aloud.

Eila introduced Ada to her beloved Ivy and Bean books. Ada still can’t read them on her own, but the most wonderful thing has been happening at least a few times a week around here: Eila is reading aloud to Ada. I’m over the moon about it. I want to secretly record it happening because it’s quite truly one of the best things ever.

Ada is really hung up on The Day the Crayons Quit. I read it at bedtime every night this week. It’s that nudie crayon – gets her every time.

Eila is on a Calvin & Hobbes kick. We have so many of them around the house and in the car and if she’s not reading them, she’s retelling them all the time. And we do in fact, thanks to Esme, have a candid camera capture of Eila reading C & H. She always reads them out loud and she does this really high squeaky voice for Calvin and it cracks us all up, which is why Esme secretly recorded her in the first place.

Esme is finishing up the Beyonders trilogy this week. It’s good she says. Not as good as Fablehaven.

And I am ending my days with Jeanette Winterson’s memoir Why Be Happy When You Could Be Normal?  I just started so it’s early in the game to make an analysis, but I can say confidently that it bodes well. I really love a good memoir and this looks like it’s going to be one.

What do you have off the bookshelf this week?