This is my absolute most favorite pie of all time! This Oatmeal Pecan Pie is the much better version of plain old pecan pie. 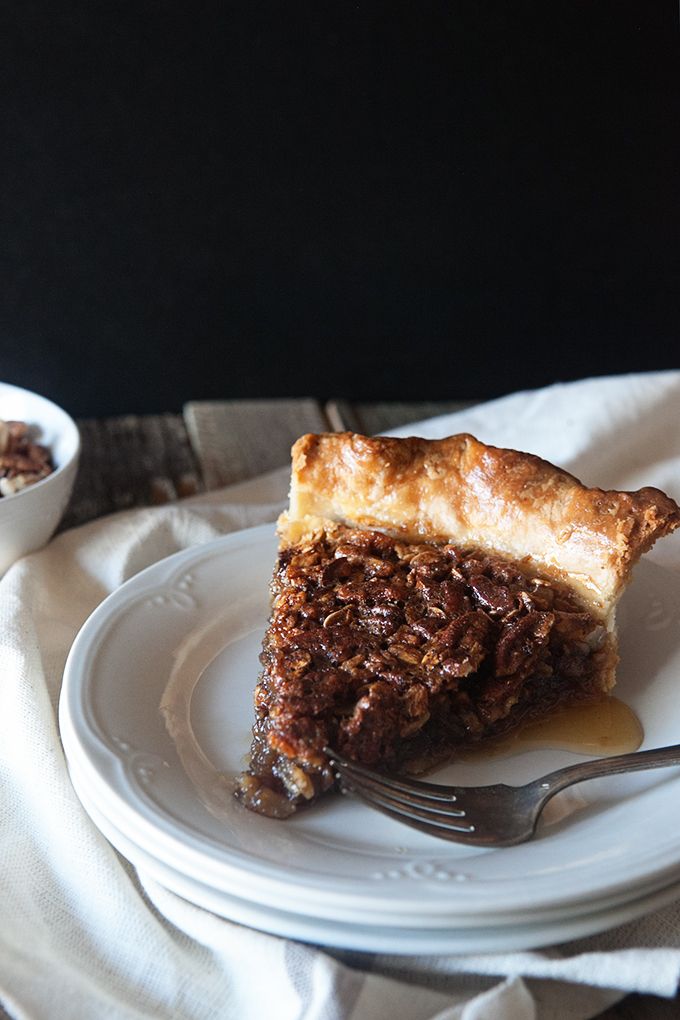 I love Thanksgiving, but really, I do it for the pie.

I find that there are very few occasions in a year that call for pie, and no other occasion that calls for a Pecan Pie. Seven years ago, after I discovered the delicious joy of this Oatmeal Pecan Pie and declared it my absolute favorite pie of all time, Thanksgiving also moved up the holiday ranks to my number 1 spot (tied only with Christmas and the Fourth of July, because Christmas music and fireworks).

I spend most of November, and sometimes a good portion of October, thinking about this pie. Seriously, I live for this pie in November. It’s my FAVORITE. 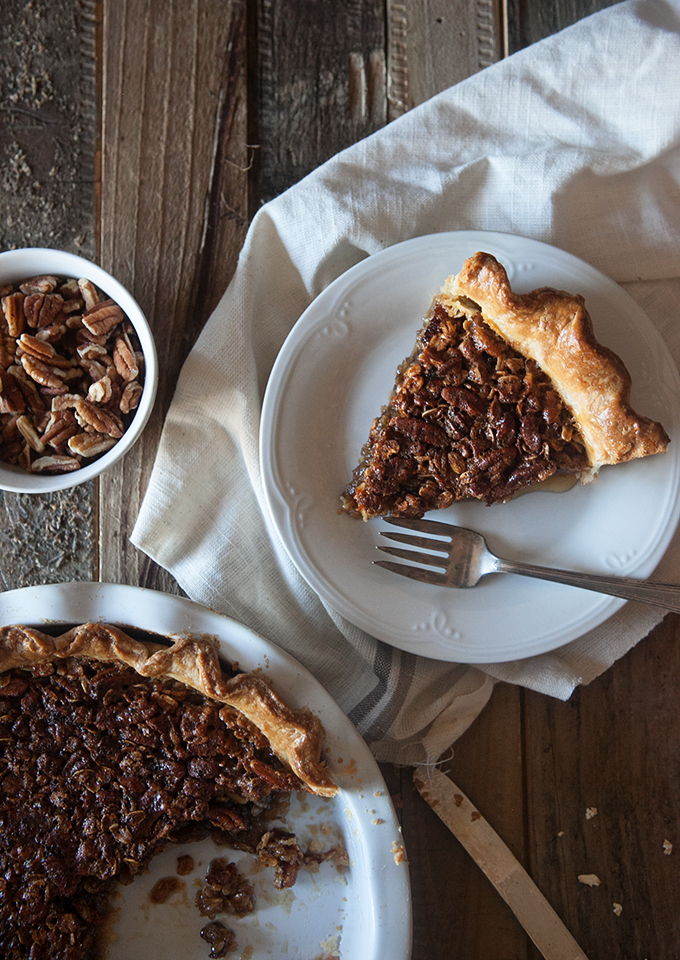 In college I spent my first Thanksgiving away from home with a boyfriend’s family for the holiday weekend. All was going swimmingly until preparations for the holiday dinner began and I saw the pies on the counter. There was pumpkin, and apple, and pecan – all my favorite Thanksgiving pies. But I was instantly homesick when I saw that they were wrapped in plastic with labels indicating they’d been purchased from Costco. That would never have happened at home. We’d outsource the turkey before we’d forgo homemade pies and the perfect flaky, buttery crust that store bought pies just never, ever get right.

I muddled through that holiday somehow, painfully aware of how much I missed my own family and our pies. The next year when I once again skipped the cross country flight for a Thanksgiving with friends, I brought my own pies.

Yes, it’s a holiday about gratitude and I always do my best to contemplate my many, many blessings . . . as long as one of them is homemade pie. 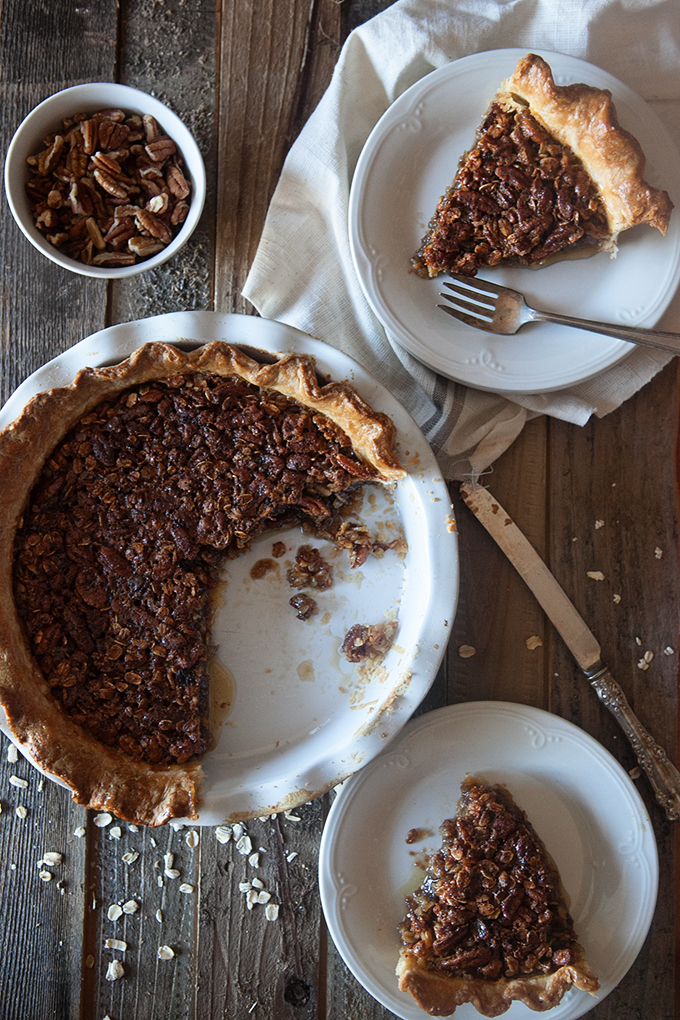 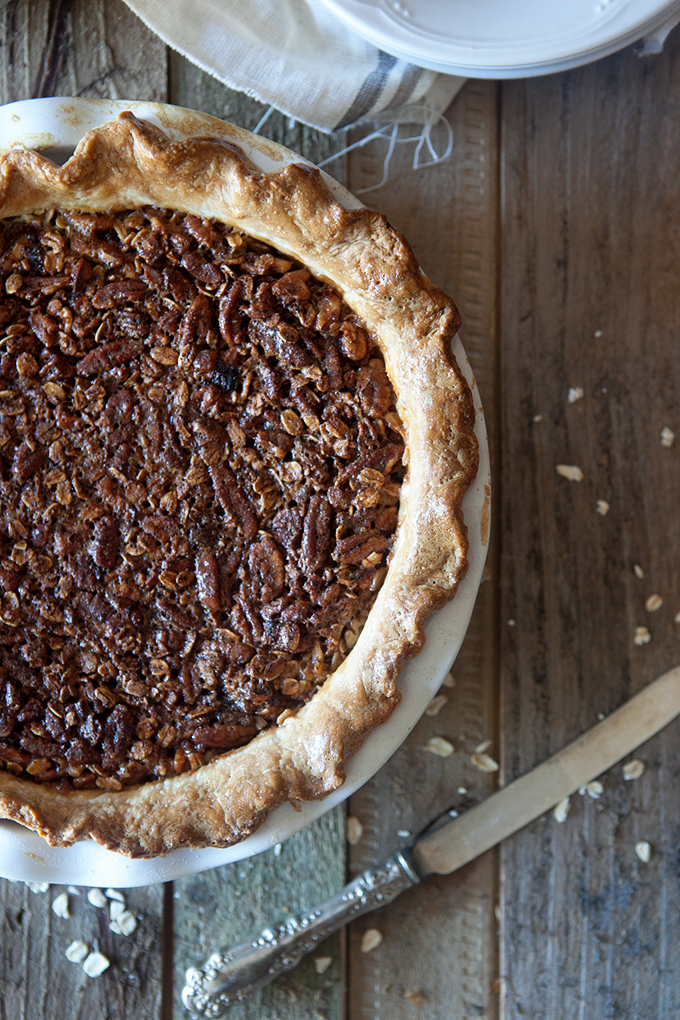 If you think you don’t like Pecan Pie, you might like this one. My mother always said she didn’t like pecan pie, until I started bringing this one for the holiday dinner and I notice she always has a slice or two. The oatmeal adds more texture, balances the sticky sweetness. It’s not just a pie that tastes like sugar, which is sometimes the complaint I hear from Pecan Pie haters – this one is more robust. Give it a try. If you already like Pecan Pie, you’re probably going to love this Oatmeal Pecan Pie.

Traditionally, Pecan Pie is made with corn syrup. I know corn syrup has been blacklisted in the foodie world and I am fine with that. Still, I really don’t think it’s a big deal to put it in a Pecan Pie once a year, you know? But, there is also an alternative to the corn syrup that actually adds a rich, nuttier flavor than the flavorless sweet taste of corn syrup – Golden Syrup. If you can find it, use it instead. If you can’t, corn syrup is just fine.  (I have had luck finding Lyle’s Golden Syrup at World Market/Cost Plus, if you have one near you.)

And one last note on the pie crust: I really like the pie crust, almost more than whatever is in the middle. I highly recommend making your own pie crust – I normally use Katie’s All Butter Pie Crust recipe and it works like a flaky, buttery charm every time. 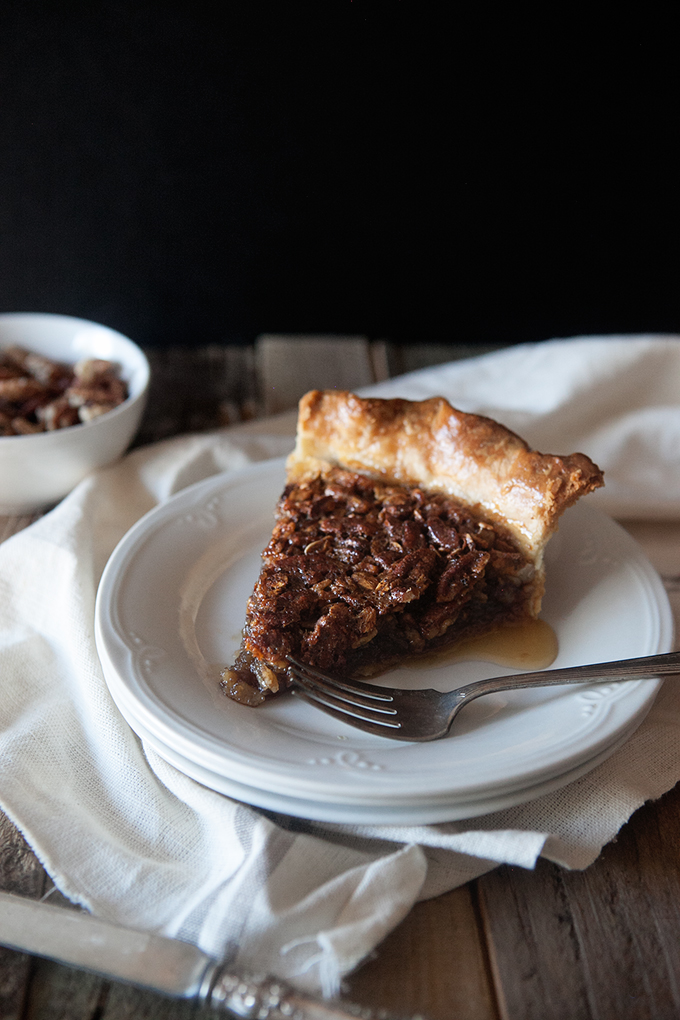 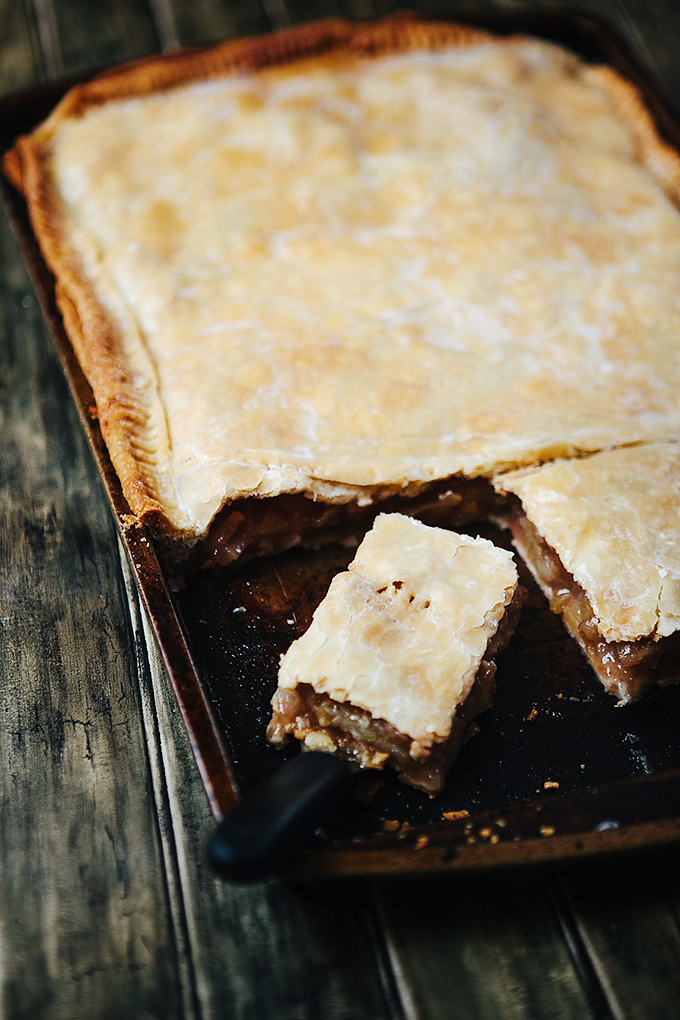 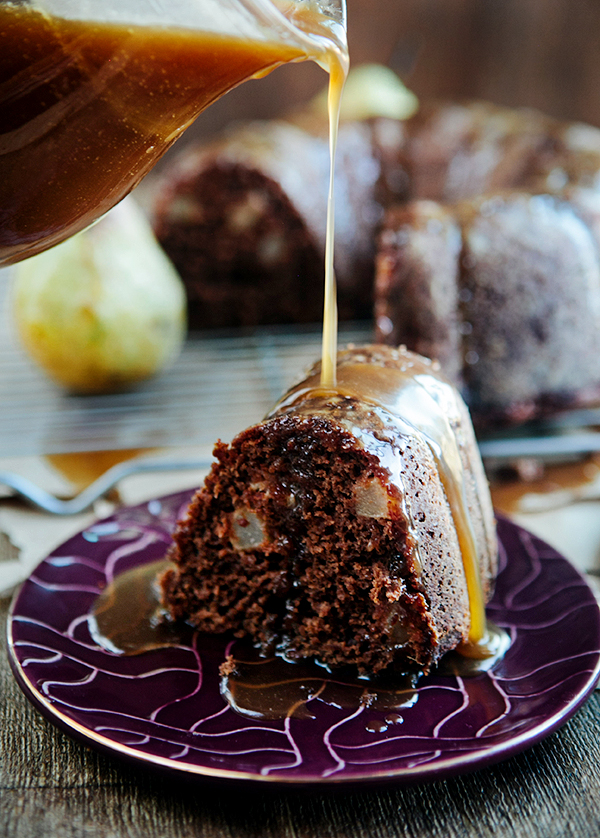 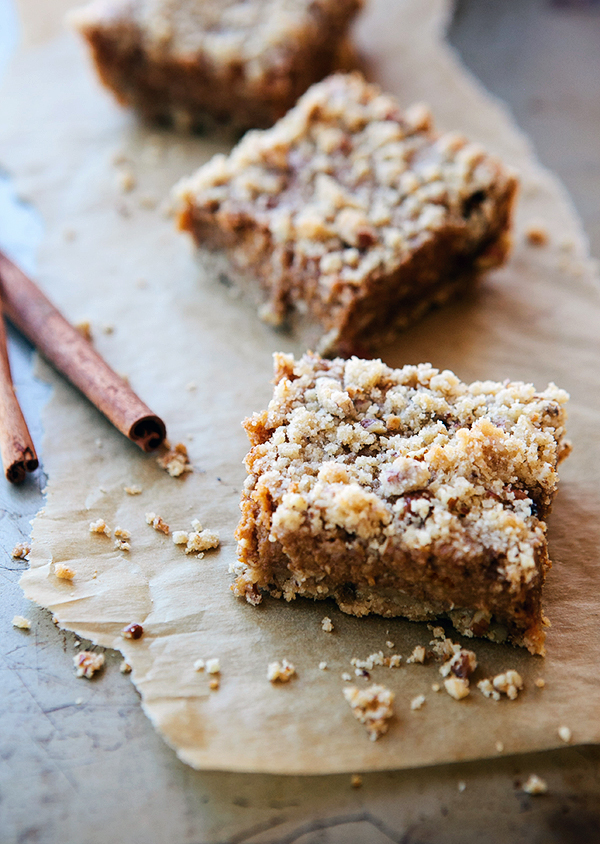 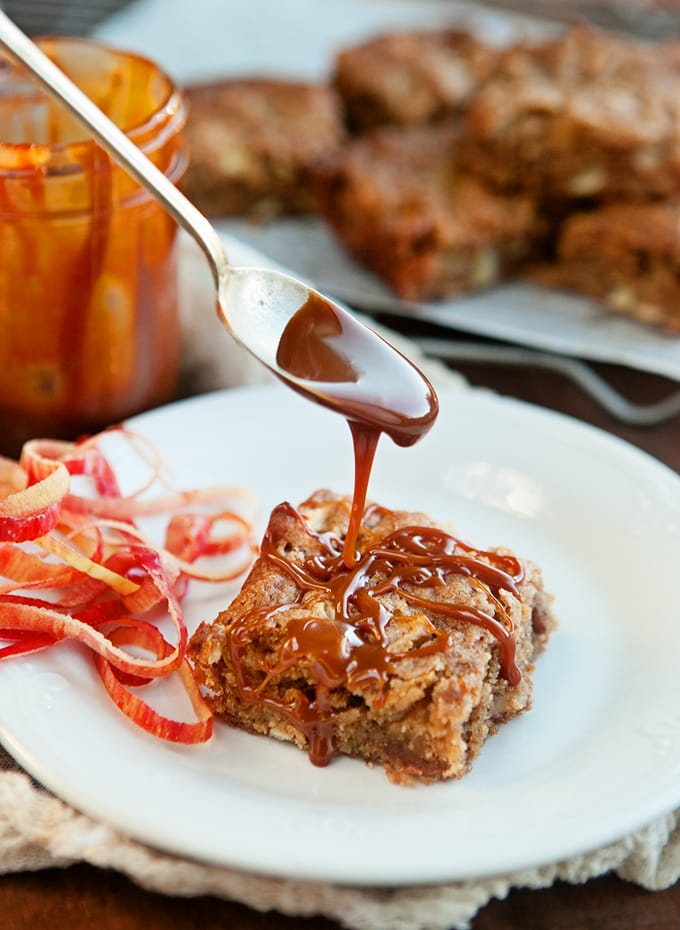 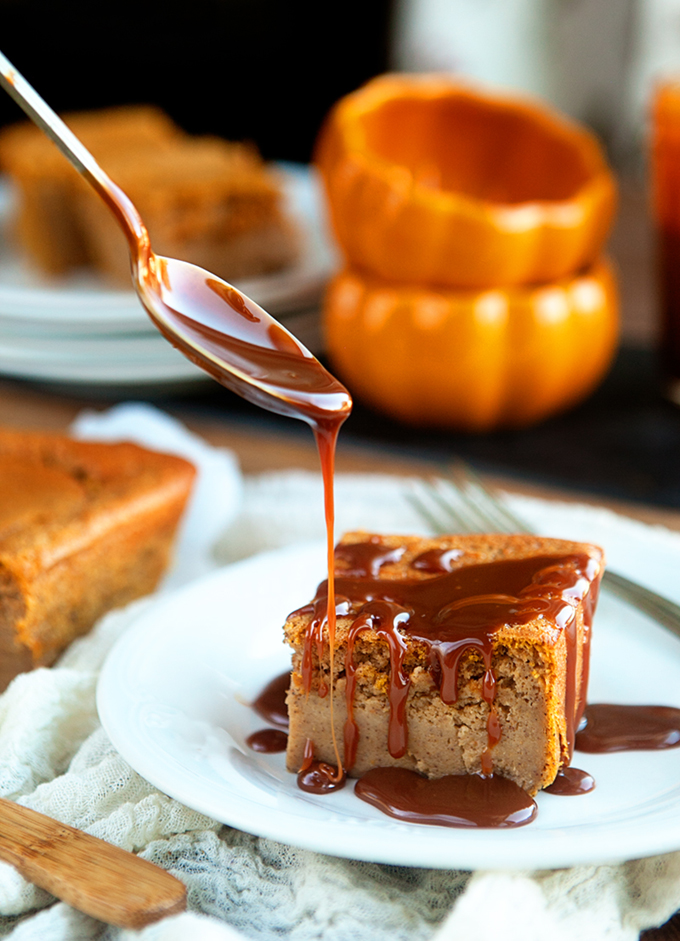