An excellent list of Middle Grade Books set in Colonial America. With these books, young readers (8 to 12) can have fun and learn a lot about history too!

I recently received a request for Middle Grade Books set in Colonial America over on Instagram and I was delighted. I studied general history as an undergrad and American History in graduate school. These days, where books and history overlap is my happy place.

For the purposes of this book list, I’m defining Colonial America as the time period between 1600 and 1799 (rather than 1776). This will give young readers a broader picture of Colonial life, the revolution, and America as a new country. 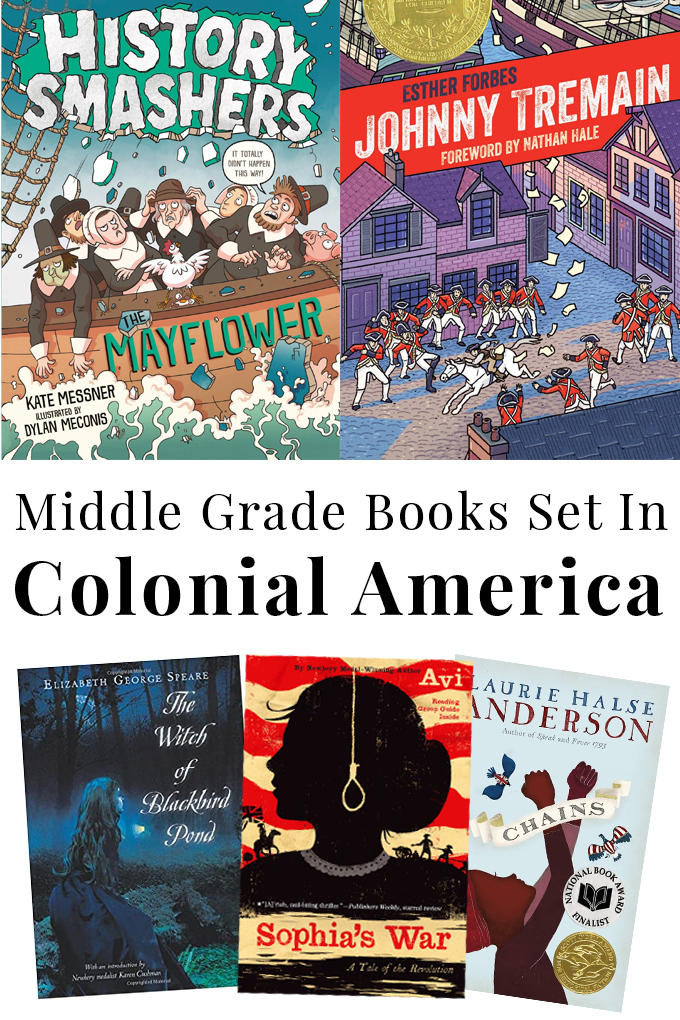 This list of Middle Grade Books set in Colonial America is notably, and regrettably, lacking in books by/about American Indians. While they were certainly key figures in the time period, I’ve had trouble finding books that accurately and fairly represent them.

I will continue the hunt for great books to fill this gap, especially books by #ownvoices authors. I’d also love to find books about life in Colonial America by Black authors. If you have any recommendations, please leave them in the comments.

Overall, Colonial America is a time period that has been largely overlooked in children’s literature. Authors take note! I’d love to see more middle grade books set in Colonial America, especially stories that don’t just revolve around the revolution. I’ll keep looking and update the list as I find more.

Note: the Amazon links in this post are Affiliate Links. Scroll down for a free printable list. 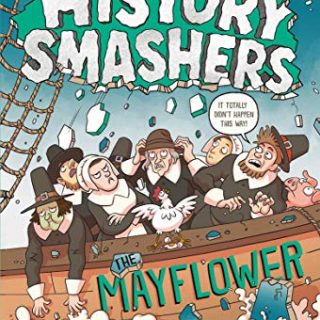 This is a phenomenal Non-Fiction look at the pilgrims who arrived on the Mayflower and settled in Plymouth in 1620. It's the whole truth and nothing but the truth, as told by the wonderful Kate Messner.

Filled with photographs, comic-book-style illustrations (by Dylan Meconis), and diagrams, to break up the text, which makes it a very engaging read. It may have all the information of a history book, but it's written in such a fun way. My kids love the whole History Smashers series! (Recommended for ages 8 to 14) 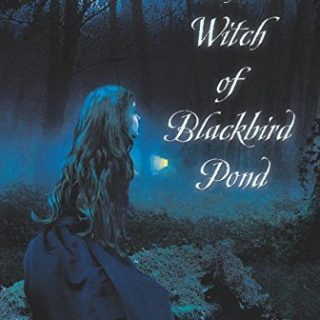 The Witch of Blackbird Pond

After Kit's parents die, she is forced to leave her home in Barbadoes and travel to Colonial Connecticut to live with family she's never met. She has a difficult time adjusting to a new way of life and the one friend she makes, an older woman named Hannah Tupper, is rejected by the townspeople and accused of witchcraft.

I recently reread this book and it was still as good as I remembered it being from my own childhood. It's an excellent look at colonial life, with a strong female heroine. (Recommended for 10 and up) 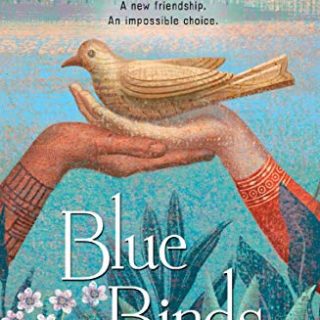 This is a charming novel in verse about an impossible friendship. Alis and her parents make the long journey to colonial America from England. But something goes wrong and they are mistakenly left on Roanoke island among the Roanoke tribe of Indians. Even as tensions rise between the indigenous people and the settlers, young Alis forms a friendship with Kimi, a member of the Roanoke tribe.

I do love a good novel in verse and this is exactly that. It's fantastic historical fiction. (Recommended for ages 10 and up) 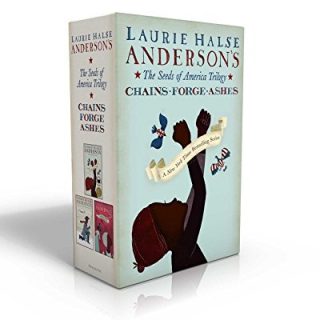 These are my favorite books on this list! I have been gushing about them since I read them. Absolutely stellar historical fiction set in the time period during and leading up to the American Revolution.

Isabel and her sister Ruth were promised freedom upon the death of their owner. But when the papers proving this arrangement can't be found, they are sold to a loyalist couple in New York. It's a fascinating look at the revolution from the perspective of the enslaved. I highly recommend this trilogy. (Recommended for 12 and up - possibly 10 and up) 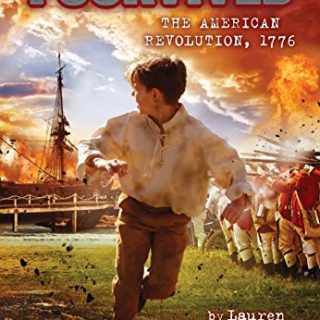 I Survived the American Revolution, 1776

Kids really love this I survived series. The author does a great job of really bringing history to life. They're also easy to read, which makes them a great pick for a lot of young readers.

In this one, 11 year old Nathaniel Fox works for his cruel uncle. But when Nathaniel takes the blame for accident caused by an enslaved child, he has to flee to escape his uncle's rage. He plans to join a ship crew, but ends up in the middle of a war battle instead. (Recommended for 8 and up) 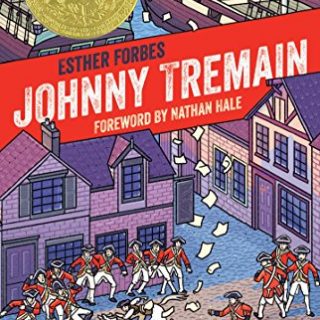 I love Johnny Tremain. For the longest time I avoided this Newbery Award winner because I thought it would be dull. Turns out, it's a fantastic story, with intrigue and romance and a fast paced plot. Journey along with 14 year old Johnny through the defining events leading up to the revolution.

I recommend this new anniversary edition specifically because of the graphic novel style foreword by Nathan Hale. (Recommended for 12 and up) 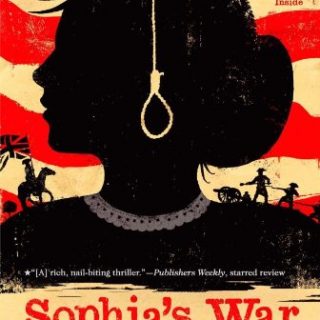 Sophia's War: A Tale of the Revolution

You can always count on Avi to have written a good historical fiction book, no matter what time period you're looking for. We really enjoyed this one about 12 year old Sophia. After witnessing the execution of Nathan Hale in New York City in 1776, Sophia decides to become a spy and do all she can to help the American cause.

It has a slow start, but this is ultimately a pretty gripping tale of espionage. (Recommended for 8 and up) 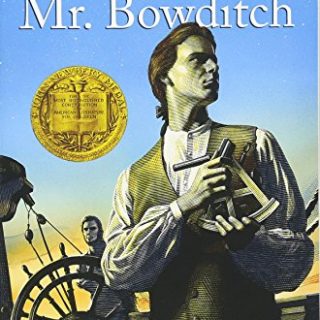 This is fictionalized biography of the real Nathaniel Bowditch, an early American mathematician made famous for his work in ocean navigation. Despite the old fashioned cover, it's a really entertaining story about how young Nat worked as an indentured servant and apprentice to an accountant before leaving his books to join a ship's crew and sail the seas.

I only recently read this 1956 Newbery Award Winner and was pleasantly surprised by how fun it was. (Recommended for 9 and up) 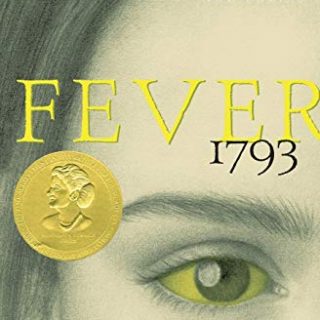 Based on the real epidemic that raged in Philadelphia in 1793, this is excellent historical fiction. Mattie Cook lives above the family coffee shop with her widowed mother and her grandfather. She lives a pretty ordinary life in early America, until the fever sweeps the streets of Philadelphia. Mattie has to be both brave and smart to survive.

This well researched, well written book is absolutely gripping. (Recommended for 11 and up) 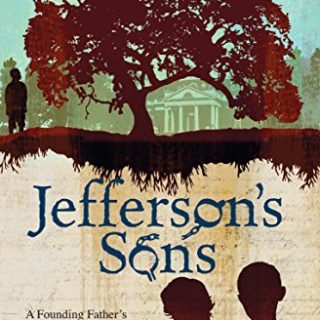 This is the story of Thomas Jefferson as told by his enslaved children. It's a tricky topic to tackle in a middle grade book, but Kimberly Brubaker Bradley does it so well. It's impossible to accurately tell the story of the founding fathers, those champions of freedom, without also telling the stories of the people they enslaved.

Jefferson's Sons is a poignant read that will inspire wonderful conversations about the true meaning of "life, liberty, and the pursuit of justice." (Recommended for 10 and up)

Note: I recently heard this author speak and she is in the process of releasing an updated version of this book. 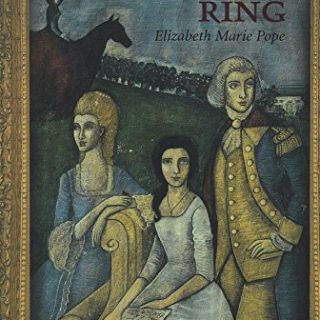 This is a funny little book, but it's also a beloved classic that is a lot of fun to read. Newly orphaned Peggy Grahame has just moved into her family's ancestral home with her eccentric uncle. With no friends and a lot of time on her hands, Peggy begins exploring the house and soon discovers that it is haunted. But it's not just any old ghosts, it's haunted by the ghosts of her colonial ancestors who want her to unravel the house's mysteries.

Much of the book is the retelling of revolutionary war stories by ghosts, which may sound dull, but is actually quite enchanting. (Recommended for 12 and up) 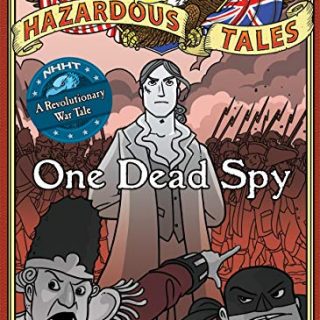 If you have a graphic novel fan, these Hazardous Tales by Nathan Hale are a lot of fun. This one is about the famous rebel spy from the American Revolution who coincidentally shares the same name as the author, Nathan Hale.

It's pretty thrilling and a really fun way to tackle American history! (Recommended for ages 8 to 12) 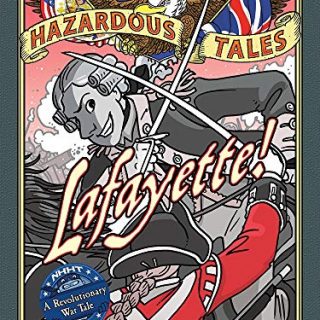 One more for the graphic novel lovers out there. This one tells the story of Lafayette, the famous fighting Frenchman.

It may be a graphic novel, but it's also a very true account of American history. Kid's love these! (Recommended for ages 8 to 12)

If you’d like a Free Printable Book List that you can use at the library and bookstore, just enter your email below and it will go straight to your inbox.

If you enjoyed this middle grade book list, you may also enjoy these posts: 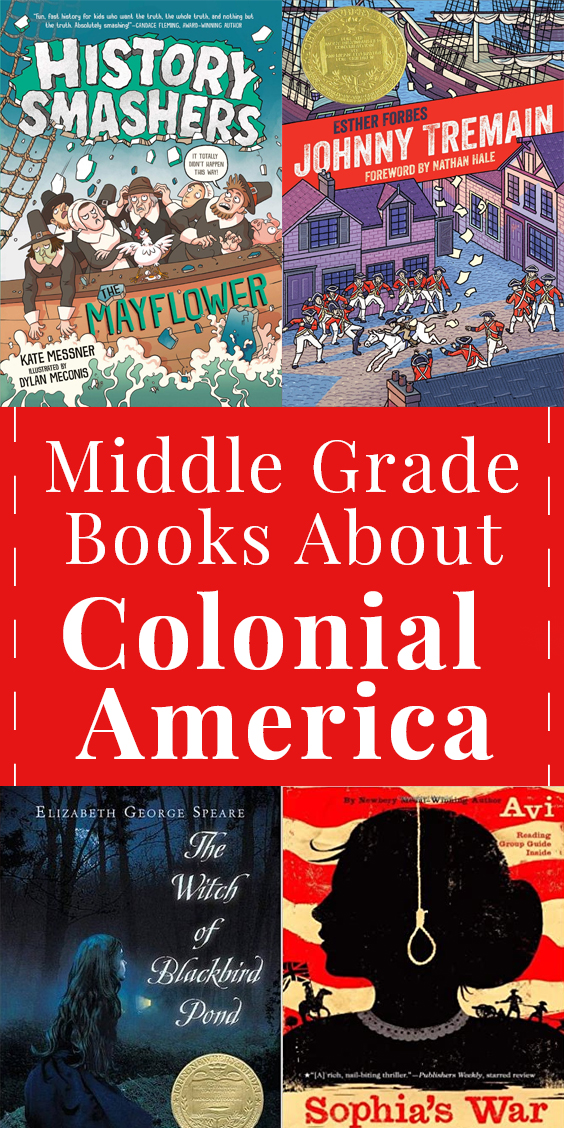