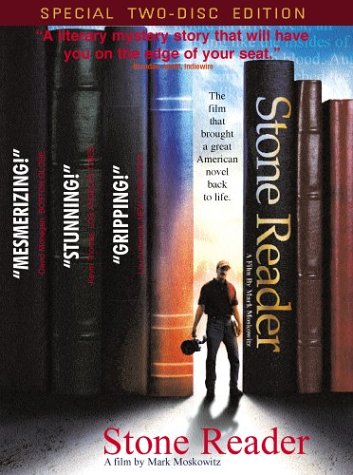 When I was in college I came across a documentary called “Stone Reader.” It’s about a guy, filmmaker Mark Moskowitz, who picked up a book called The Stones of Summer by Dow Mossman back in 1972 after reading a few raving reviews about it. But although it was critically acclaimed, Moskowitz just couldn’t get into it so he shelved it and moved on with his life.

In 1998, Moskowitz finds the book on his shelves again – I think maybe he was moving and unpacking or something like that – and doesn’t really remember anything about it so he begins reading it again. This time, almost 26 years later, The Stones of Summer strikes him as a revelation, as true genius.

However, when Moskowitz tries to buy more copies of the book for friends and looks to see what else the author had written, he can’t find a trace of the book or the author anywhere. The book isn’t for sale anywhere, it’s not at the library, and the author doesn’t seem to exist anywhere anymore. As he keeps looking, he realizes he can’t even find anyone who’s ever read the book or heard of the author. He’s baffled. And this is where the documentary gets really interesting because Moskowitz is so curious how such a well written book and it’s author could drop of the map that he decides to make it his mission to solve this literary mystery.

The documentary then chronicles Moskowitz’s year of searching for the lost book and it’s author and all of the interesting things and people he uncovers along the way.

The book itself, The Stones of Summer, is the coming of age story of Dawes Williams in his hometown in Iowa. The story follows him through his early years as a precocious, somewhat angry, but insightful child and into his teenage years where he tries to be “one of the guys” but is far too sensitive and emotionally deep to ever really pull it off.

The book is lauded for being ambitious and imaginative and deep. Reviewers have called it “epic” and described it as a book that captures the literal heart of post-war America in the turbulence of the 1960s. It’s apparently so compelling and mystifying that Mark Moskowitz devoted a year of his life to searching it and its author out.

That being said, after I watched the documentary I was dying to read the book. Thanks to Stone Reader, the book was back in print and I eagerly procured a copy and set out to read this magnificent work of art. But I couldn’t do it.

Let me interrupt my own silence by adding that I hope that nothing I once said by way of sympathetic response dissuades you from reading Dow Mossman’s book for the first time, an experience that I myself can never have again, an unrecoverable moment like the one Jay Gatsby sought in vain to retrieve, like the home to which Thomas Wolfe told us we cannot return. – John Seelye, (New York Times Book Reviewer) July 2003

I tried to read it, I really did. And I’m not ready to disagree with reviewers, but I just couldn’t keep reading. It felt muddy trying to slog through the long passages and try as I might, I just couldn’t connect with Dawes. I quit a few chapters in and shelved it.

The book keeps haunting me though, as does the documentary that inspired me to buy it in the first place. I see it on the shelf sometimes and I feel like it’s a mystery still waiting to be understood. It took Mark Moskowitz a good 25 years after his first attempt to read the book before the magic and mystery revealed themselves to him, so I remain hopeful.

But whether you’re ready to enter Dow Mossman’s brave new world of fiction or not, I highly recommend the documentary. It’s one of those films that can be appreciated by anyone who’s ever really loved a book.

I just finished Elizabeth Kolbert’s The Sixth Extinction: An Unnatural History  – There have been five mass extinctions on earth over the last half billion years and it looks like we’re heading into the sixth. It’s science writing and field reporting for the non-scientific mind and though it frightened me, I’d really recommend it.

Esme is reading The Land of Stories by Chris Colfer. She hasn’t said much about it yet, but she also hasn’t put it down for two days so . . . It’s another series so she’s probably going to be lost for a while yet.

Eila is doing her light summer reading this week with The Yeti Files. According to the seven year old, they are so hilarious.

Adelaide is loving The Great Sheep Shenanigans, a really excellent picture book. We read it every night this week and every time that silly old wolf lands in a pile of poo, she laughs like she’s never heard it before. Poo humor never gets old, apparently.

Rory’s obsessed with ducks right now so we’re reading a lot of Hairy Maclary and Zachary Quack. He quacks all the time and it’s the cutest thing in the world!

All together, we’re reading The Penderwicks every night. It’s such a sweet bed time family read.

What do you have off the bookshelf this week?