Lalani of the Distant Sea is an incredible new Middle Grade Fantasy from Newbery winner, Erin Entrada Kelly. I read it, along with my 11 year old and 13 year old, and we loved it. Here’s our review! 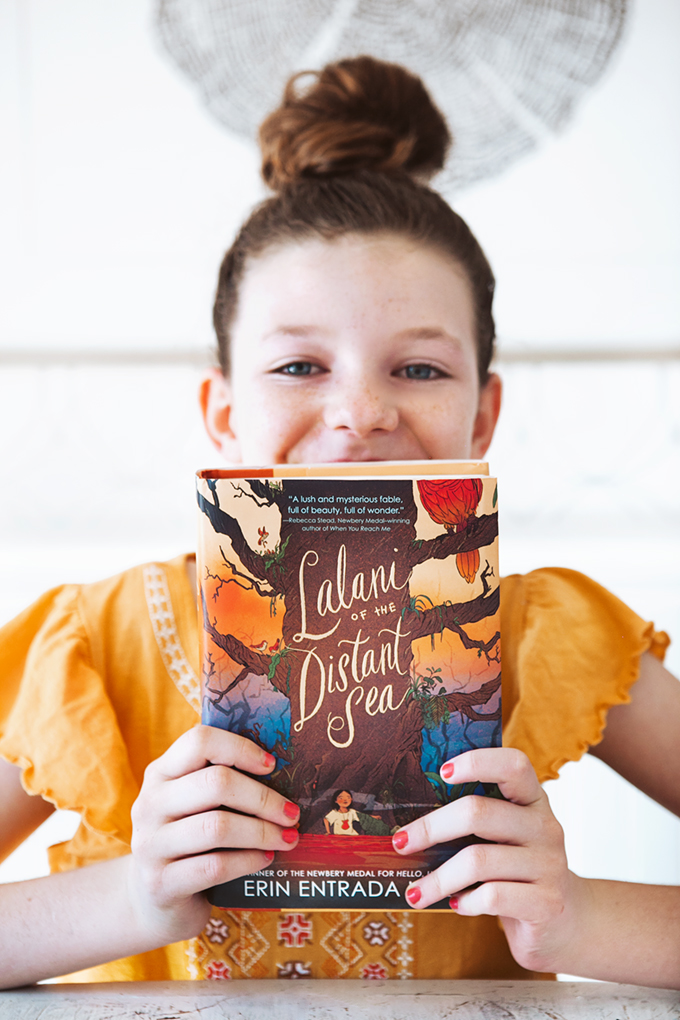 Leo Tolstoy said, “All great literature is one of two stories; a man goes on a journey or a stranger comes to town.”

Lalani of the Distant Sea is to my sensibilities, great literature, albeit middle grade fiction. And in this instance at least, Tolstoy is mostly correct. There is a journey, a fantastic, dangerous, magical journey, but Lalani is a twelve year old girl, and an ordinary girl at that.

Lalani Sarita lives on the island of Sanlagita, an island haunted by the presence of two mountains. Mount Kahna casts a dark shadow over the villagers of Sanlagita, always threatening vengeance and destruction if they displease it. Likewise, Mount Isa is a rumor of light in the distance. Legend says that Isa is the home of all of life’s good fortunes and even though the islanders can’t see the fabled mountain, they feel it calling to them.

Year after year, the Sanlagitans send a ship full of “chosen” men to answer Isa’s call on the distant sea, but since no one ever returns, it remains a haunting mystery.

Lalani’s father was once chosen to cross the distant sea, but he, like all the others, never returned. In his absence, his brother Drum, a cruel and angry man, claimed her father’s hut and his women too, ruling the household with fear. Lalani spends her days trying to stay out of Drum’s way while working her way through a mundane rotation of cleaning, cooking, and mending – the only jobs for women on the island.

But when a series of unfortunate events – a runaway animal, a miserable  drought, a spreading illness – lead Lalani a little too close to Mount Kahna, she finds that her good intentions may have doomed the whole island. To save Sanlagita, Lalani takes a small scouting boat and sets off across the distant sea on a truly epic journey. 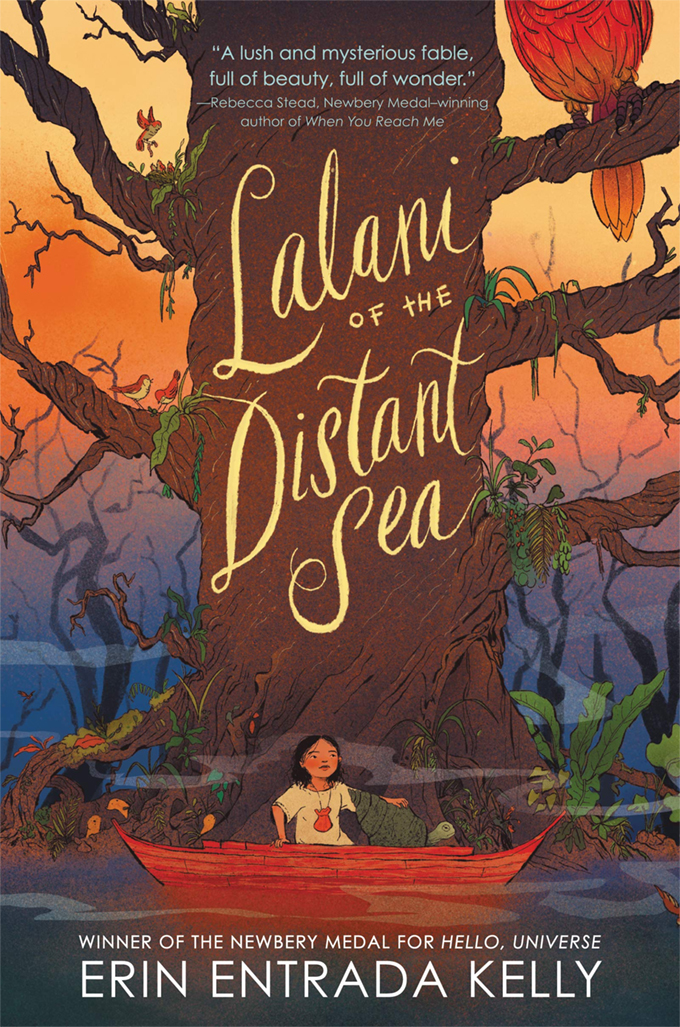 What We Loved About Lalani of the Distant Sea

The book is based on Filipino folklore and it captures a complex legacy of oppression and hope with rich imagery and masterful story telling. It is an absolute delight to read.

It’s an adventure, fast paced and engaging for kids. It’s also a beautifully written book, full of symbolism and metaphor – the kind of middle grade book that adults can fall in love with too.

I especially loved that although the book is full of magic and mythical creatures, Lalani and her friends are completely ordinary children. One of my favorite themes in literature is that of the ordinary hero.

In the prologue it says,

“There are stories of extraordinary children who are chosen from birth to complete great quests and conquer evil villains.

This is no such story.

Sometimes, you are an ordinary child.

Sometimes you choose yourself.”

Lalani does choose herself to save her island and she succeeds with only her own determination to keep her going. She has no special powers, no magic abilities, no particular talents. She heads towards Mount Kahna, and later across the distant sea towards Isa, armed only with her own good intentions.

I also loved Hetsbi, Lalani’s timid friend who is too afraid to stand up for what he believes. It is only as he comes to see the consequences of his own inaction and fear that he musters enough courage to take a stand. And when he finally does, it’s one of the most powerful moments in the book.

We have many opportunities in life to overcome fear and embrace courage,” said Taiting. “Once we seize the first opportunity, it becomes easier to seize the second.” He paused. “But you are not a coward, Hetsbi. I know this to be true.”

“If you were a coward, you wouldn’t be standing here,” said Taiting. “Living what you believe can be just as difficult as living in silence. Sometimes even more so.”

What I loved most of all though is the contrast between light and dark. You have the two mountains, one promising and light, one dark and vengeful. You have an island oppressed, by a ruler (the menyoro) and also by fear – fear of the mountain, the distant sea, and the illness plaguing the women. But there is also so much hope on the island and it’s that hope that keeps them sending a ship out to sea time and again, always hoping to find the light.

Even in Lalani’s own home, she loves her mother and she takes comfort in stories and friendship, but she’s oppressed by her Uncle and his cruel son who bring violence and darkness into their hut. It’s only because of the darkness and the fear that she’s able to embark on her journey to find light.

And the journey is the best part of the book. Each mythical creature she meets has its own relationship with the light and dark – like the Weeping Loset, a tree creature that suffered a great loss and lives with deep heartache, yet can still feels a spark of light once again when she tries to offer a wandering girl the comfort of a breeze.

The creature’s stories are told in short vignettes, accompanied by gorgeous illustrations, throughout the book. They really add depth to the book and enhance the dark fairy tale aspect of the story. 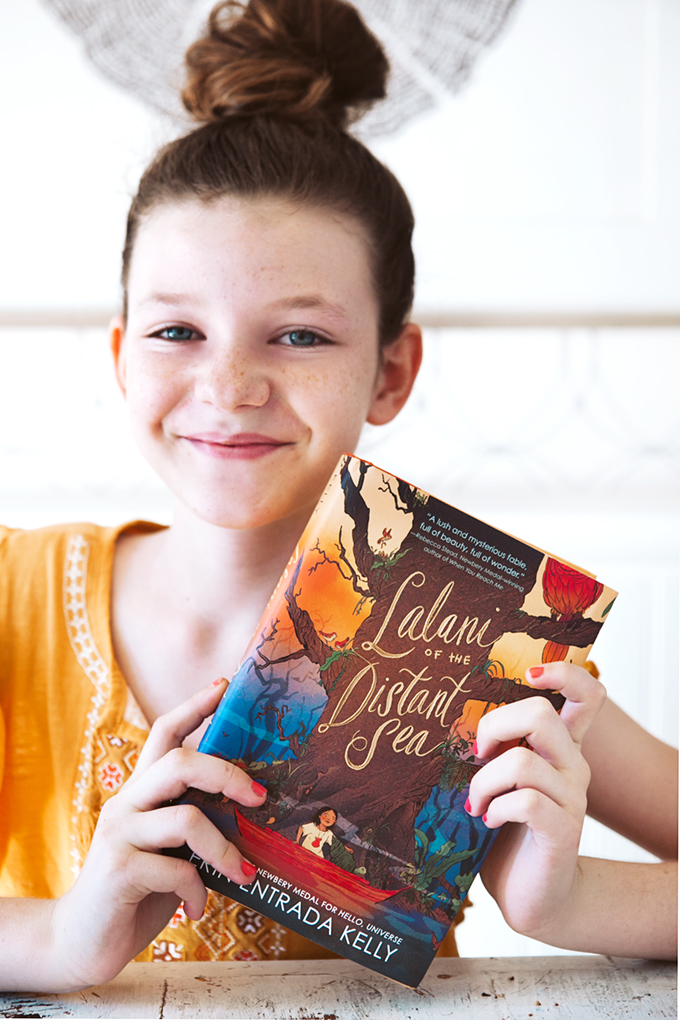 What You Need to Know

Lalani of the Distant Sea by Erin Entrada Kelly is available to purchase this week! You can find it here on Amazon.

It’s Middle Grade Fantasy, probably best for 10 and up. I can even see teens loving this one just as much as middle grade readers. And this really is the kind of middle grade book that adults will love too. This one can reach a wide audience – like most of the best books.

There is darkness in the book, but always juxtaposed with light. While it is a dark fantasy, I don’t think young readers will find it frightening – my kids didn’t, and one of them is a pretty sensitive reader.

When I presented it to my kids I described the story as Disney’s Moana crossed with The Girl Who Drank the Moon, with a little bit of The Thickety thrown in. And while I think that is an entirely accurate depiction, it’s also incredibly original too.

This would be an excellent book for a book club (for kids or adults) because there is so much to talk about. With all of its rich storytelling, it would also make a fantastic read aloud.

If you want to read more about the Filipino folklore that inspired this book, check this out.

My 11 year old and 13 year old read it and LOVED it too! We highly recommend this one!

If you enjoyed this review of Lalani of the Distant Sea, you may also enjoy these middle grade book reviews:

I received a copy of Lalani of the Distant Sea from the publisher, Harper Collins, for review purposes. All opinions are entirely my own.