Open Book by Jessica Simpson: A quick summary and review. This new celebrity memoir really surprised me with its depth and honesty. 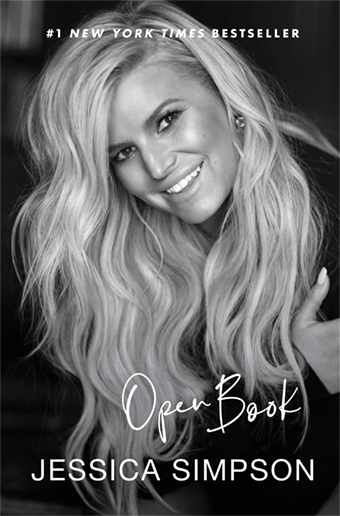 Even though memoir/biography is my favorite genre, I used to avoid celebrity memoirs, assuming they’d be trite attempts to garner more fame. But several years ago a friend recommended Open by Andre Agassi (affiliate link). It challenged all of my assumptions.

Open is one of the most powerful and moving memoirs I’ve ever read. The contrast between Agassi’s public success and his private struggles was eye opening and I’ve returned to passages in his book time and again.

Ever since reading Open, I do occasionally seek out celebrity memoirs, hoping for a similarly surprising and illuminating reading experience. That is exactly what I found in this new memoir, Open Book by Jessica Simpson (affiliate link).

I only vaguely remember Jessica Simpson’s rise to fame. While I do recall Britney Spears and 98 Degrees playing on the radio in the late 90’s, I was never very interested in pop music and I didn’t pay much attention at the time. I also don’t recall ever watching Newlyweds, the groundbreaking reality tv show that really made Jessica famous. So, I went into this book with very little knowledge about Jessica or her pop culture reputation.

I listened to Open Book on Scribd (read by Jessica Simpson) and I was hooked from the very first chapter. She has a lot to say about fame, about the men that defined her for so much of her life, and about the appropriation of female bodies. She’s been the preacher’s daughter, the music industry’s “sexy barbie,” and television’s blonde airhead, but in Open Book, Jessica is a brave and honest truth teller.

Jessica did co-write the book with a ghost writer, but she has been keeping detailed journals since she was fifteen years old, and her voice comes through with authenticity. A lot of the media blurbs about the book present it as a juicy Hollywood gossip tell-all, but that’s not what it felt like to me. I read this as I believe Jessica intended it to be read: as a heartfelt and candid story about a woman and the many roles she’s had to play.

Jessica shares her childhood as a Baptist minister’s daughter in a family struggling to make ends meet. She opens up about her experiences being sexually abused by a family friend for several years, and the role she played to protect her younger sister.

She also talks a lot about her faith and how it, not a desire for fame, led her to her singing career. Then, as she gained traction in the music world and her father became her manager, she took on the role of the family breadwinner.

The chapters about her years as a young pop-star and then one of television’s very first reality tv stars are fascinating. It’s interesting to see how her career and ambition affected her marriage. And she has a lot of interesting things to say about the ditzy role she played on Newlyweds and how that affected her life.

There is a lot of revealing information about the men she married and dated. However, the more interesting stories are the ones she tells about her own body and how the men in her life and the media owned it. As a young girl, singing at religious events, she was shamed for being “too sexy.” Then, in 1997, when she signed her first big record deal, the music executives told her that she needed to lose 15 pounds and be sexier. This was the beginning of a lifelong struggle with weight and body image. The “mom-jeans incident” in 2009 was appalling to me.

But despite her struggles with fame, the media, her addictions, and the toxic men in her life, Jessica’s achievements are an admirable part of the story too. While she’s played a lot of public roles, in her private life she’s been ambitious and hard working. She’s a mother, a wife, a musician, an actress, and she runs a billion dollar fashion line. Open Book is an honest look at her mistakes, but also a nod at her considerable achievements.

I started this eleven hour audiobook on Monday evening and finished it by Tuesday afternoon, accomplishing little else during that span of time. That should give you a sense of just how much I enjoyed listening to Jessica Simpson share her life story.

You definitely don’t need to be a fan of Jessica Simpson to enjoy her candid and emotional memoir of self-discovery and self-acceptance. I thought it was fascinating.

I definitely recommend this one as an audiobook. It’s fun to hear Jessica read her own life story and I loved the emotion that she brought to the listening experience. The end of the audiobook has several of her new songs to listen to as well.

You can find Open Book by Jessica Simpson here on Amazon (this is an affiliate link).

If you enjoyed this review of Open Book by Jessica Simpson, you may also enjoy these reviews: