Corn and Potato Chowder is winter comfort food at its best. It’s a creamy, hearty chowder to warm even the coldest day. 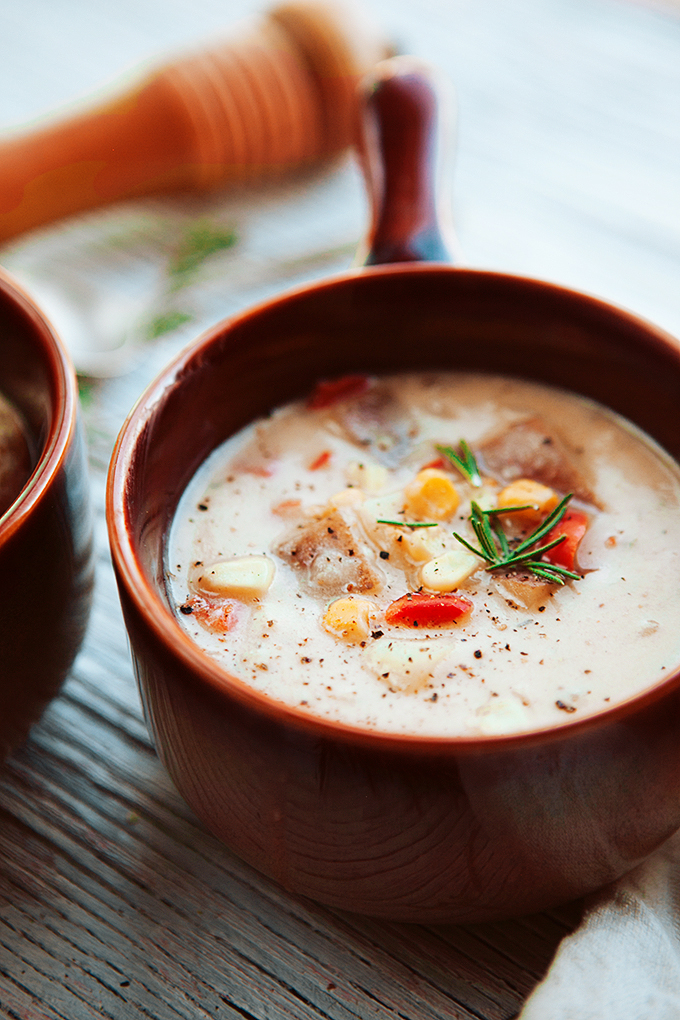 I’ve been making this Corn and Potato Chowder for nearly 14 years now. It was one of the first recipes I learned how to make when I first started cooking on my own!

I originally shared this recipe here back in 2012, and while so much has changed since then (I have 4 kids now!), I’m still making this chowder. It’s the kind of recipe that you can make every winter for 14 years and still get excited to put it on the weekly menu. That’s the very definition of a “a keeper.”

It’s a simple chowder, just a handful of ingredients. But it packs a lot of punch. It’s full of flavor, it’s hearty and warm, and it can fill you up body and soul on a cold day.

In theory, you could eat this as a late summer chowder. It does call for corn after all. But I don’t make chowders in the summer, not even for fresh corn off the cob. It’s just too hot. In my world, chowder is for November – March when scarves and hats are not just nice, but necessary. This recipe was developed for frozen corn and it works perfectly. 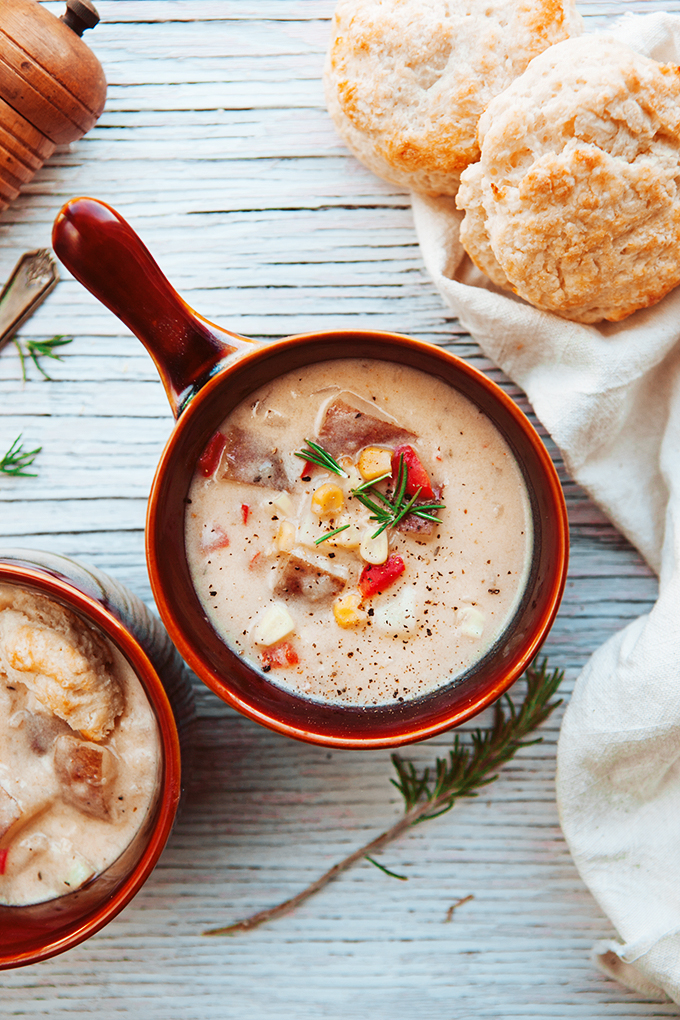 My favorite thing about this Corn and Potato Chowder, however, is that it has a “secret” ingredient. This was especially appealing to me back when this was one of only three recipes that I had mastered. But even now that I cook three meals a day nearly every day of the week, I’m still pleased when I serve this and people taste and ask, “What is that flavor? It’s so good?”

Okay fine. It’s a secret worth sharing: the secret ingredient is Old Bay.

Old Bay is a seasoning blend that includes a mix of celery salt, black pepper, crushed red pepper flakes, and paprika. It’s usually used in seafood recipes, like crab cakes and lobster rolls. But it’s also the perfect blend of spices for this Corn and Potato Chowder! It tastes so good and the flavor is just unique enough, and just the right amount of delicious for people to keep asking, “What is that flavor?” 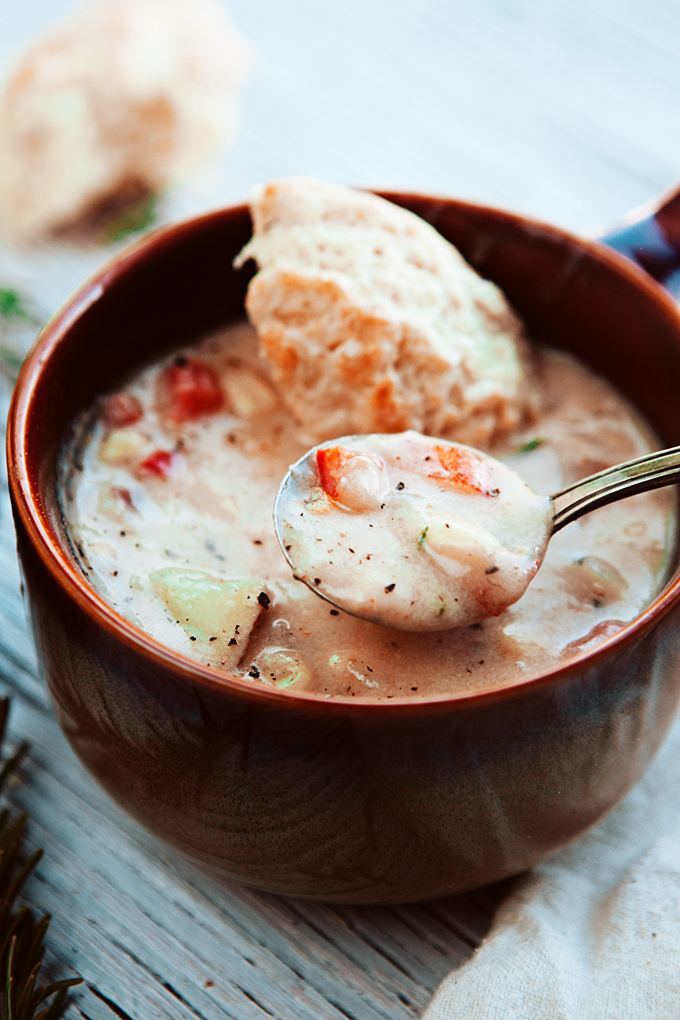 This Corn and Potato Chowder is easy to make. The hardest part is chopping the potatoes, and even that only takes a few minutes and minimal effort. You likely have all the ingredients on hand. If you don’t have Leeks, no worries. You can always just use a medium sweet yellow onion instead. It’s not exactly the same, but it’s also not very different.

I like to serve this chowder with hot Buttermilk Biscuits. They’re perfect for dipping and this soup begs for some dipping. Plus, the tangy buttermilk pairs well with the mild, creamy soup. It also pairs very nicely with this Beer Batter Bread with Caramelized Onions.

Add a sprig of fresh thyme or rosemary, or spoonful of fresh chopped chives if you want to dress it up a bit. It’s good old fashioned home cooking, but it’s tasty enough that you can serve it for company and feel good about yourself. 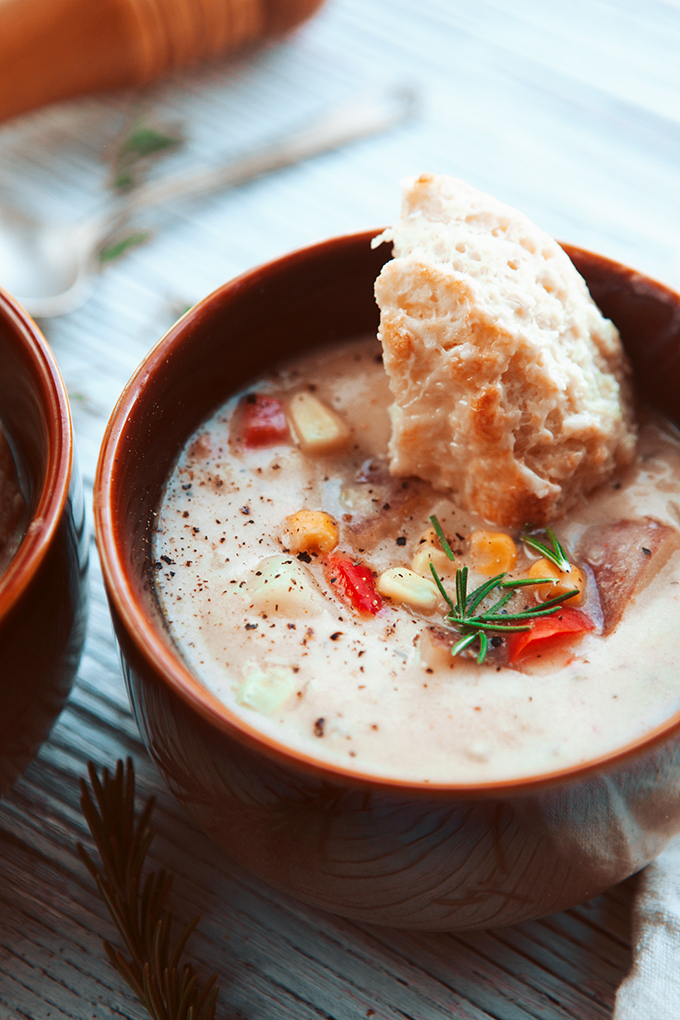 You can substitute a medium sweet yellow onion for the leeks. It's not exactly the same, but it's not that different.

I love soups and stews this time of year.  What are your favorite cold weather comfort foods?” 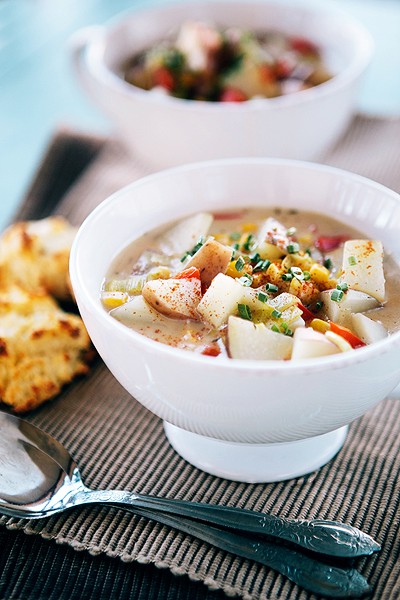