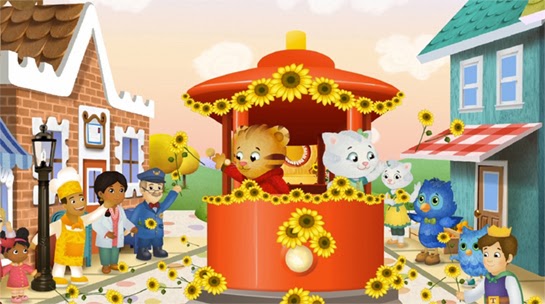 We don’t own a television and that works well for our family. We do use our computers to watch some shows and movies, but not having a television helps us to be more selective in our media choices and limit our screen time.

One of the few shows that my littlest one watches and loves is the PBS show Daniel Tiger’s Neighborhood, which is why I was more than happy to participate in a program with The Motherhood to learn more about the show from its creators and producers.

I fell in love with Daniel Tiger on an end-of-the day car ride home with three tired, grumpy kids in the backseat. My three-year old was having a melt down over a book that her sister would not hand over. She was yelling when my five year old reminded her what Daniel Tiger says about getting upset. She started to sing, “When you feel so mad that you want to roar, take a deep breath and count to four.” No joke, all three of the kids sang the song and counted to four! The crisis was averted and this mom became an instant lifelong Daniel Tiger devotee.  (watch the song here) 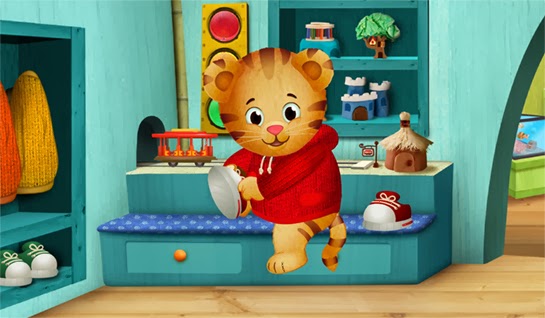 I’m not the only mom out there who likes Daniel Tiger. The show is one of the 5 highest rated programs among moms since its premiere in 2012.  After talking with Angela Santomero, the creator and executive producer, Roberta Schomberg, the child development consultant for the Fred Rogers Company, and Chris Loggins, the production manager, it is easy to see why moms can feel so good about letting their preschoolers watch Daniel Tiger. I was so impressed with all of the thought and work that they have put into this show for preschoolers!
Research shows that young children make strong connections to characters on TV, trusting, listening, and learning from those characters. Fred Rogers recognized this connection and emphasized how important it is to make sure those characters are trustworthy. Angela Santomero, the show’s creator, has made it her goal to make sure that all of the characters in this Mr. Roger’s Neighborhood spin-off are helpful role models for preschoolers. The producers of the show have used Fred Roger’s statement, “In all things we do, we should think of the children first” as they have worked to create a show that will support preschoolers growth and development.

These are few of the most important things I learned about Daniel Tiger’s Neighborhood and their new line of toys, designed to help kids keep learning and developing through play:
As a mom, I can highly recommend this show. It was exciting to have a conversation with the creators and producers and I only feel more confident in saying that this is a really great show for young children!  The toy line, exclusively available at Toys R Us is a great extension of the show’s mission to help support early childhood development and growth and promote imaginative play and healthy emotional development. My preschooler loves her Daniel Tiger plush toy and he’s a constant reminder of all the helpful lessons she has learned on the show, not the least of which is that she needs to flush the toilet – thanks Daniel. I really do love Daniel Tiger.
I partnered with The Motherhood to learn more about Daniel Tiger’s Neighborhood and their new line of Toys. This is a show we watched and loved before this partnership. I was compensated for my time, but all opinions expressed here are entirely my own.