As long as polio exists anywhere, it is a threat to children everywhere. Today, we’re 99% of the way to eradicating polio all together. We need to finish the job! Let’s dance because a world without polio is a world where every child can dance no matter where they live! 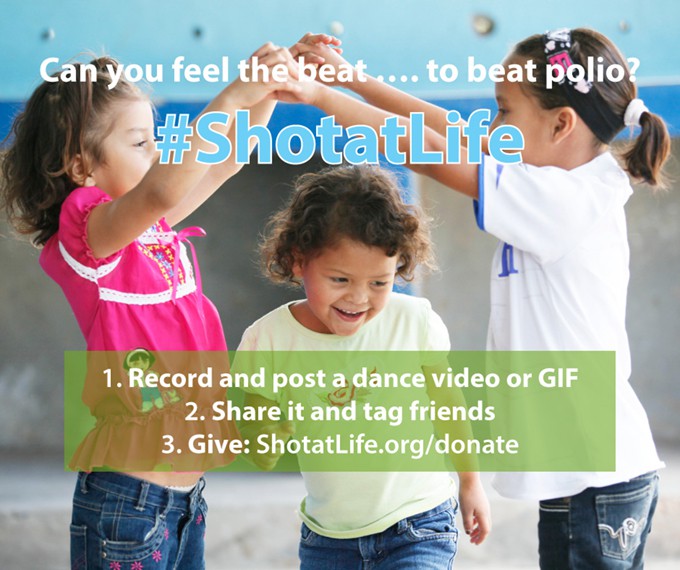 This year, Shot at Life is encouraging everyone to dance to end polio around the world. Why dancing? Polio is a debilitating disease that can cause paralysis and often impedes a child’s ability to walk or dance.

As the holidays roll around, I am always looking for ways to involve my kids in more of the “giving” side of the season and focus less on the materialism that can spoil the beauty of the holidays. My kids were more than happy to get involved in Shot at Life’s campaign to end Polio, especially when they found out they got to record videos of themselves dancing!

In 1988 there were 350,000 cases of polio in 125 countries. Today there are 51 cases in two countries: Afghanistan and Pakistan. Polio exists in fewer places than ever before and we are 99% of the way to eradicating it altogether. Eradicating polio will have a long-lasting impact. Polio eradication will save $50 billion over the next 20 years and allow resources and personnel to address other health challenges like Ebola.

#shotatlife Dancing to end polio from Allison Ruth on Vimeo.

Our family is on board! We created a short video/GIF to spread the word that we are dancing to end polio and donating a small amount ($5) to support polio vaccines for children globally. We had a lot of fun getting involved in this as a family and it’s the perfect way to kick off a holiday season of service and generosity.

Create your own video or GIF to spread the word and involve your family and friends in a globally important cause this season. Use the hashtags #shotatlife and #givingtuesday  Head over to Shot at Life to learn more and make a small donation that will have a big impact.

I am joining The Motherhood to support Shot at Life and help end Polio for children everywhere. All thoughts and opinions are entirely my own.