My review of The Hunt for the Mad Wolf’s Daughter by Diane Magras. This is an INCREDIBLE book! 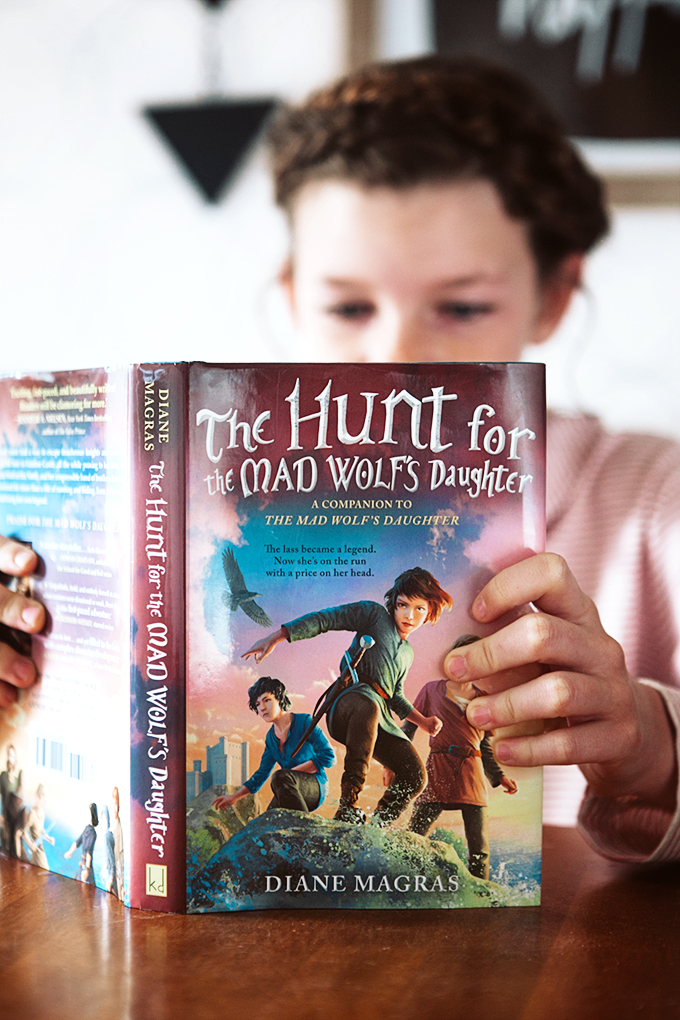 When you completely fall in love with a book like The Mad Wolf’s Daughter and a character like Drest, there’s nothing more exciting than finding out that there’s a sequel on the way. I’ve been waiting for this one ever since I found out it was in the works.

The sequel, The Hunt for the Mad Wolf’s Daughter, was released this week. We had the privilege of reading it a few weeks in advance and I’m very pleased to tell you that it’s just as good as I hoped it would be.

In the first book, Drest, with Emerick the wounded enemy knight in tow, is on a mission to save her father and brothers before they are hung at Faintree Castle. The sequel picks up right where the first book ends. 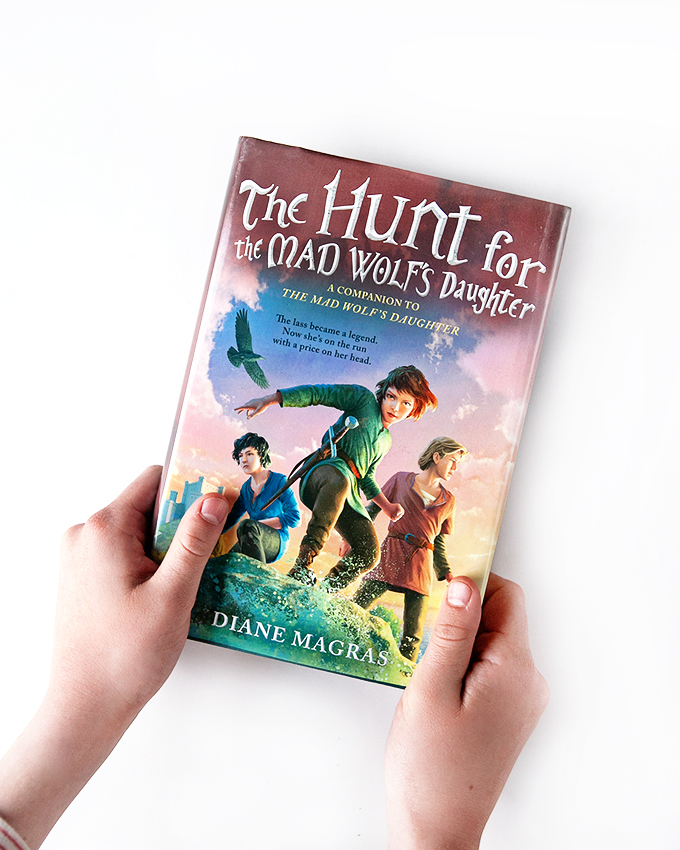 The Hunt for the Mad Wolf’s Daughter

This is a spoiler free review, so I won’t tell you whether or not Drest’s first mission was successful. But I can tell you that in The Hunt for the Mad Wolf’s Daughter, Drest is on the run once again. This time she has a bounty on her head, which makes her second journey even more dangerous than the first.

Drest became a legend in the first book. But her strength worries the powerful men that want to stop her, so they put a bounty on her called a “Wolf’s Head.” This is a dreadful sentence for only the most terrible, most bloodthirsty criminals and whoever captures the “wolf’s head” receives a substantial reward.

A sentence like that is not easy to end. Child, do you know what this means? If you are called a wolf’s head, every town in the lowlands will hear. And every lad, lass, woman, and man will hunger for the coins they’d get if they were to cause your death. Merewen

Drest is in a lot of trouble this time! Luckily, she’s no longer just a “wee lass,” but a full fledged warrior in her own right. This time, she knows how to trust herself.

There are familiar characters joining her on this dangerous run – both Emerick and Tig are along for the ride again. There are also plenty of new characters to keep the story interesting, like Lady de Moys, a powerful woman who leads her own home army in Scotland and her deceased husband’s army in France.

Like her first book, Diane Magras has written another exciting adventure. The writing is fantastic, with a strong sense of place and complex character development. The story itself is engaging and keeps the pages turning so fast.

I read this one aloud with my kids (ages 12, 10, 8) and because they begged for “one more chapter, pleeaase” ever single night, we finished it in less than a week. 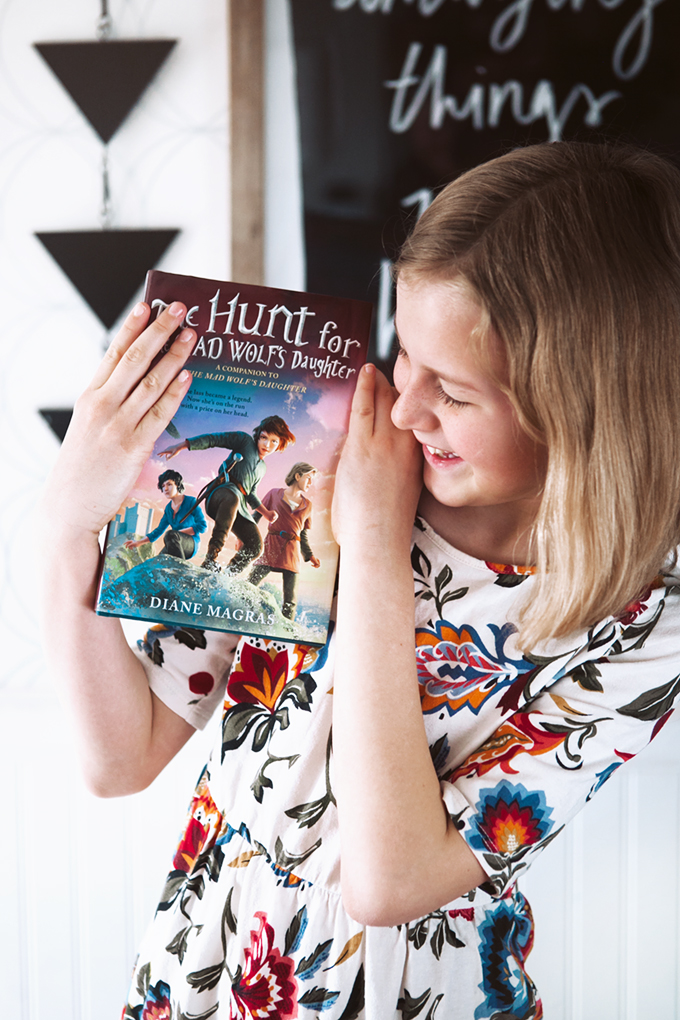 I’ve said it before, but I can’t help saying it again, I just love the strong female characters in these books! In the first book, a key element of the code the Mad Wolf’s war band lives by is:

Honor and protect all matrons and maidens

In the sequel, Drest has learned enough to come up with her own code:

Rely on the strength of matrons and maidens

I’m shouting a great big happy YES to this!

But I also want to clarify, this is not just a Girl’s book, nor is it at all a Girly book. This is a book for everyone – with sword fights and castles, war bands and knights, this has a broad appeal across gender and age.

My kids also loved the adventure and the humor – especially all the funny insults, like “you mewing squirrel-brained fish-gut,” flung jokingly, and even lovingly, between siblings and friends.

While The Hunt for the Mad Wolf’s Daughter often reads like fantasy (it’s just so fun and exciting), I love the historical fiction aspect of it. In both books, there is an Author’s Note at the end with so much good information. This will be so helpful for parents and educators that want to take the book beyond the fun and examine the historical/educational aspects of it too.

The author’s notes are very well organized into topics covered in the book, which is helpful if you want to dive deeper into particular subjects. For example, in book one Magras goes into more depth about:

And in the sequel, she offers more information about:

You can certainly just read this book for fun, and you won’t be disappointed. However, it’s also a great resource if you want to learn more about medieval life and Scottish history.

Favorite Quotes from The Hunt for the Mad Wolf’s Daughter

I know it’s a hard burden to carry, but it’s better to know than be ignorant  Emerick

You will stay strong. And brave, and bold. You will live beyond this curse, and rise to glory. I say this, so shall it be.Lady de Moys

Sometimes people have to risk their lives. And sometimes people fall. Da always talked about the battles he’d fought along with your castle and the friends who’d fallen and how he’d grieved but knew he had to go on – Drest

You have to accept what I’ve risked for you if you want your castle back, and stop treating me like a wee lass. I’m a warrior like any of your knights. I have to take risks.” Drest

Hope in the darkness can be a powerful weapon. Wulfric

Sometimes only words can save you Drest’s Code

Stop by and see what else is happening on The Hunt for the Mad Wolf’s Daughter Blog Tour:

March 1 – Some the Wiser – Character Recommendations